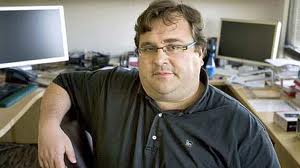 LinkedIn founder Reid Hoffman presented his vision today for “Web 3.0” at the South by Southwest Interactive conference in Austin.

Hoffman, who is now a partner at Greylock Partners, sounded dismissive of most of the buzzwords that have been tied to Web 3.0 — bandwidth, “appification”, video, location, real-time, and mobile. (He said mobile is probably the most significant trend of the bunch, but it’s “kind of boring”.) Instead, he said that the next big trend in the evolution of the Web, and the next big opportunity for entrepreneurs, is data.

Specifically, he said that if Web 1.0 involved “go search, get data” and some limited interactivity; and if Web 2.0 involves “real identities” and “real relationships”, then Web 3.0 will be “real identities generating massive amounts of data.”

Of course, there are risks associated with you sharing data tied to your personal identity. (Two of the conference’s keynote speakers, 4chan founder Christopher Poole and Web video star Felicia Day, both made arguments for the benefits of anonymity.) But Hoffman said startups should just follow two important rules about data. First, “never ambush your users.” Second, “not all data is created equal.” A lot of the data that people provide online isn’t harmful, he said — what companies and users need to be really careful about is “data that is essentially equivalent to a password,” which includes things like credit card numbers.

Hoffman offered several examples of companies that are already doing interesting and useful things with social data: LinkedIn offers a new feature called Skills, where users can find people, companies, and jobs related to each skill. There’s Waze, a mobile application that uses data about your location and speed during your commute to deliver traffic advice. And there’s Redfin, an online real estate broker (which Greylock invested in) that gives homebuyers more information about their prospective homes and the housing market.

In what Hoffman acknowledged was a rather self-referential move, he proposed collecting social data about the interesting apps that can be built with social data — audience members are supposed to post their ideas on Twitter with the hashtag #web3, and his team will try to create an infographic showing off the ideas.

In addition to talking about data, Hoffman also offered what he called his 10 rules of entrepreneurship.