Religions are some of the oldest, strongest forms of social networking — even two strangers will immediately trust each other more if they find they share the same faith.

No surprise, then, that they’re finding their ways on to Facebook, the social network known for its strength in complementing real-life relationships. Bible Verses is the most popular religious themed Facebook application, with 346,471 users. Its nearest rival is similarly-named Daily Bible Verses, which has 294,067 users.

Back in 2005, ascent of religious-themed social networks was already being predicted, as a natural outgrowth of the rise of social networking. Notably, many stand-alone religious-focused sites have struggled against secular competitors, which came earlier to market and offer a similar range of features, such as profiles, friends, message boards, etc.

The good news? Facebook’s developer platform seems to have given faith-based networking a more direct way into the hearts of Facebook users, at least Christian Facebook users. 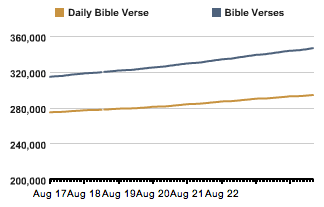 See the chart of growth by Bible Verses and Daily Bible Versus (owned by Mychurch) at left (via Appaholic). Like Facebook news feeds themselves, these applications rely on providing fresh material — but bible verses, not your Facebook friend’s activity — to keep users’ attention on a regular basis.

In what is now-standard practice, companies with large Facebook applications are building companion applications to grab more growth, and then cross-promoting them. Mychurch is doing the same. It has built a My Church application so Facebook users can identify themselves with an actual church they belong to. Like most other religious-themed applications on Facebook, it still has less than 10,000 users.

Overall, the top 46 Facebook apps have more one million users apiece. More than 100 have in excess of 100,000 users, even though the platform itself is only three months old.

Myspace, the world’s largest social network, recently told the New York Times it had more than 100,000 religion-focused groups while faith-based sites like Mychurch (its free-standing site), Xianz, Muslimspace and others reported well under that number of total users. New religious sites continue to launch. Some larger religious organizations have successfully developed more full-fledged web sites of their own. Willow Creek Community Church, based in Chicago, ties its mega-congregations together via small groups and culture-focused activities, and has its own social networking site for 20-somethings.

Religious groups often depend on young people to grow their ranks. Who knows, now that Facebook applications are getting bought by other well-funded companies, will wealthy mega-churches get into the acquisition game too?