Federal agents have raided the Manhattan office of RentBoy.com, one of the Internet’s largest male escort sites, Pix11 reports.

CEO Jeffrey Hurant and several employees were reportedly arrested Tuesday on suspicion of conspiring to promote prostitution under the guise of offering “companionship” from its escorts, officials said.

Hurant and six current and former workers are expected to appear in court Tuesday afternoon.

According to the affidavit, RentBoy’s slogan is “Money can’t buy you love…but the rest is negotiable.” The site also calls itself “the original and world’s largest male escort site,” and claims 500,000 daily unique visitors. The affidavit also claims that RentBoy accrued $10 million in revenue between 2010 and 2015.

From the criminal complaint: 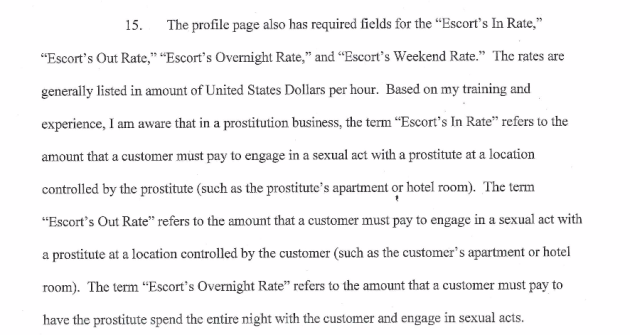 Users pay $59.95 a month for a basic subscription to RentBoy.com. The “platinum” tier costs $299.95. Advertising on the site can cost hundreds of dollars more, and users can pick the “sexual services they are willing to perform and the price charged,” prosecutors said.

You can read the criminal complaint affidavit here.

A long-surviving holdout from the dotcom era, RentBoy.com was founded back in 1997. That the company is only taking heat now is remarkable, as similarly controversial tech firm Ashley Madison faces pressure from a high-profile leak.

Other tech companies, including Craigslist and Grindr, have also faced criticism for allegedly enabling prostitution.