Targeted search and display ads are the bread and butter of online advertising today. But ad networks like Reply are learning how to deliver qualified leads — in Reply’s case, potential buyers for cars, homes, home improvement, and insurance deals whose self-selected qualifications that result in up to double the conversion rate from ad to purchase. Since adding publisher tools and more refined categories into which leads can be segmented for automated buying and selling through Reply, the company has seen conversion rates climb to 50-100% over the rates for search and display ads.

Reply works by collecting pre-qualifying information from Web surfers — “I’m looking to buy a home in 94145,” for example — then selling their click-throughs on an ad to a buyer looking for a matching profile. The genre is called lead generation or just “leadgen.” 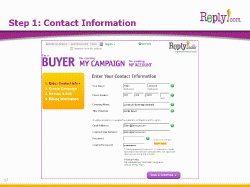 Generating leads is seen by many marketers as the next step in online advertising. Why? Because lead generation has the potential to grow the market for online ads by making them more effective and less wasteful. Today, Google’s AdSense pulls in $20-30 billion per year, but Google only accounts for about one tenth of all ad spending.

Reply execs are quick to praise Google as a partner rather than a competitor. Google is a massive source of traffic to Reply. But Reply serves its own ads — ads that include widgets to capture, say, a potential car buyer’s ZIP code and basic profile.

That information is used to sell the buyer’s click destination in an automatic auction inside Reply. For example, a customer who responds to a Reply widget to say that they’re in ZIP code 04240 — Lewiston, Maine — and looking to buy a new Chevrolet may get passed to the website of a Chevy dealer in nearby Auburn. 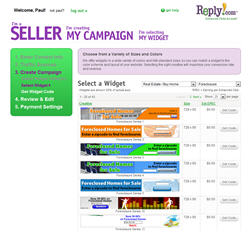 Reply adds more categories into which clicks and leads can be segregated, separating them from other types of traffic. The result is a stream of traffic against which a Chevy dealer is willing to pay more money per click sent from Reply’s ad widgets to his site, because it’s all people in 04240 who want to buy a Chevrolet.

Another example is home sales. Reply’s slide below shows how a potential buyer lists their ZIP code, then gets redirected to realtors with listings in that area.

Reply was founded in 2001 by Payam Zamani, who previously founded Autoweb back in the first Internet boom. Zamani has about 100 employees headquartered in New York. The company, which Zamani bootstrapped on $1.5 million of his own money, has so far raised another $13 million from Scale Venture Partners, $4M from Outlook Ventures, and $3M from individual investors including former Apple CFO Debi Coleman. 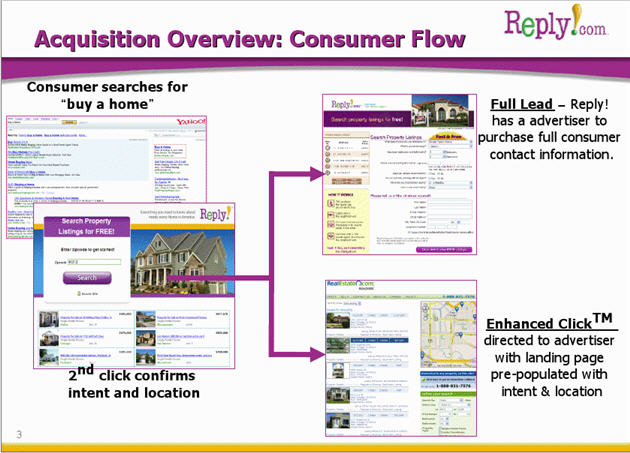