According to a new report from Angel Investment Network, confidence has strongly returned to the startup ecosystem in the U.S. and in the U.K. 18 months since the start of the pandemic: roughly three-quarters of startups say they’re now confident about the next year. The report surveyed the views of startups in the U.S. and U.K. to see how they have responded more than a year and a half after the pandemic first hit.

This shift in confidence levels represents a remarkable turnaround and highlights the strangeness of the period we’re now emerging from. It’s particularly underscored by the fact that 62% of U.S. startups and 59% of U.K. startups reported seeing business  growth negatively impacted. Of those who had been raising funds before the pandemic, close to one in two saw investors pull out.

The resilience and adaptability of startups are particularly exhibited through the sensible strategies adopted in both countries, including a stronger focus on networking, bootstrapping, and holding off on launch plans. 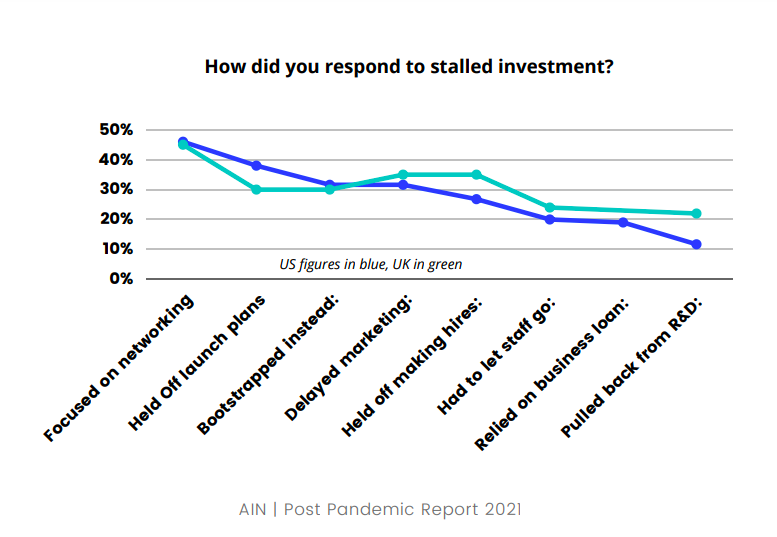 However, while activity is solidly re-emerging, the report also analyzes what can help create a better startup ecosystem in the future. Raising investment remains the biggest challenge, according to 85% of all startups surveyed. There is also a firm belief in both countries that governments can continue to play a key role going forward, principally through tax relief to encourage further angel investment — the lifeblood of early-stage funding.

Furthermore, the report identified the biggest bugbears for startup founders. The top issue in both countries was investors demanding too much of a stake in the business. Time-consuming due diligence was also a pressing concern, as were very slow rejections.