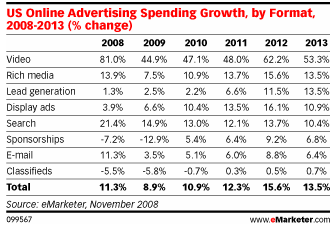 No surprises here. Growth in U.S. online ad spending will slow next year, according to the latest projection by eMarketer — a downward revision from the research firm’s pre-economic crisis projection, made in August. The new projection sees online ad spending growing 8.9 percent to $25.7 billion in 2009, compared to the $23.6 billion that it expects to be spent by the end of 2008. In August, it estimated 14.9 percent growth next year.

This is the first time eMarketer has projected single-digit annual online ad revenue growth. The firm also projects there will be a slow recovery in online ad growth for years to come; companies will have less money to spend on ads, the report implies. It expects 10.9 percent growth in 2010, with the online ad market continuing to grow slowly over the next several years, nearly doubling to $42 billion in 2013.

Online video ad growth is going to take one of the hardest growth-rate hits, the report says. That category is seeing 81.0 percent growth this year, which amounts to a puny $587 million. Next year, growth will drop to 44.9 percent, with spending coming in at $850 million. The growth rate of video ads still appears relatively high, because the category gets so little money compared to other types of online ads. Even by 2013, eMarketer projects video ads will reach only $4.6 billion — a fraction of how much is currently spent on television ads. Monetizing online video sites like YouTube, or the many video content startups out there, is going to be a long slog. What eMarketer can’t predict, of course, is if entrepreneurs are going to come up with radically better ways of monetizing online videos. 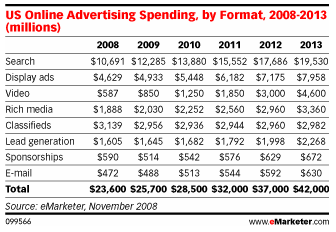 Search ads, of course, are still bringing in the most money this year, at $10.7 billion. Search ads are targeted based on what a user is searching for; as users often search for things they want to buy, advertisers are able to more closely correlate search ads with sales. Such data justifies spending more on the category. But eMarketer also is expecting slower growth here — in part, because search advertising is already so much larger than the other categories. Search ads will still add up to $19.5 billion in 2013, though; eMarketer thinks search will continue to account for roughly half of all online ad spending. Meanwhile, Google’s stock has started to tick up again, after its lows last week.

EMarketer released these revised projections based on the latest data from the Interactive Advertising Bureau (IAB) and PricewaterhouseCoopers (PwC).