The National Venture Capital Association and PricewaterhouseCoopers won’t be releasing their report on fourth quarter venture investments until later tonight, but Private Equity Hub has already published a list of the 10 biggest investors using the same data from Thomson Reuters. Pretty much all of the firms shrank their investments compared to the previous quarter; Sequoia Capital and Kleiner Perkins Caufield & Byers, the two biggest names in venture capital, both funded less than half the companies that they did in Q3.

Now, the number crunching here is relatively basic, but it’s still compelling. Sequoia, for example, backed nine companies in Q4, down from 19 in Q3, while Kleiner Perkins invested in 11 companies, down from 26. That’s a pretty big contrast with a catchphrase I’ve heard from some VCs, that “venture capital is still open for business.” (On the other hand, there were a few firms who actually did more investments in Q4 than in preceding months, such as U.S. Venture Partners and Atlas Venture.)

I also tried to look at the numbers a bit differently than PE Hub (whose chart is pictured below) — I calculated the average rate of investment for the first three quarters of the year, rather than the whole year, then compared those numbers to Q4. Using that method, Kleiner’s investments dropped 57 percent, and Sequoia’s dropped by 52 percent.

Dow Jones VentureSource released its own data on venture investing last week, reporting that VCs invested $5.5 billion in 554 deals, down 30 percent from the same period in 2007. 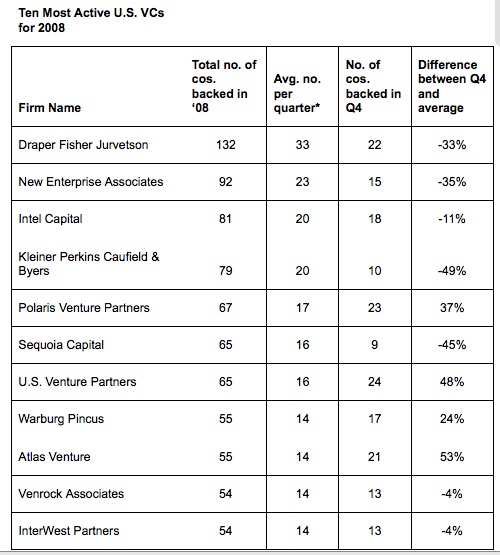