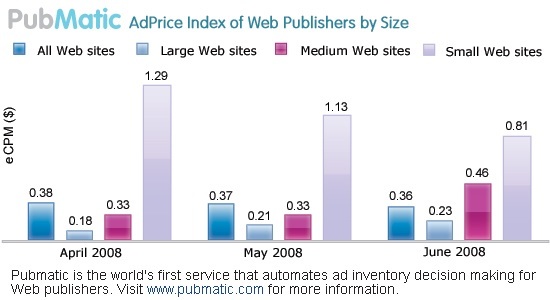 Online ad networks have been getting a lot of hype over the last couple of years. But many of these companies have been relying on sales deals with brands and ad agencies to build revenue — and not relying so much on measurable, reliably reported customer responses to ads.

Now that the general U.S. economy is doing relatively worse and brands are cutting back on their advertising budgets, ad rates are staying flat — or dropping. Pubmatic, a company that sorts and places the most valuable ads onto web sites from across competing ad networks, has released a monthly report today, showing that online ad rates for publishers have basically stayed level over the last three months.

The latest data in the monthly report: Effective cost per mille (eCPM) rates dropped from an average of $0.37 to $0.36 between May and June, overall. Smaller sites fared worse, and so did most online vertical categories.
But first, some exciting technical notes before we get into the details: ECPM measures how much a site earns by taking the total earnings for an ad that runs on a site, dividing it by the number of impressions the ad receives, and multiplying that number by one thousand; it is industry shorthand for how much an online ad is worth. The Pubmatic report reflects net web site publisher ad monetization through ad networks. It excludes both the revenue share that ad networks kept, and ads sold directly by publishers to advertisers and ad agencies.

While small sites took a hit, so did most of the categories in Pubmatic’s index of web sites.

Entertainment — the only vertical that went up
May: $0.29 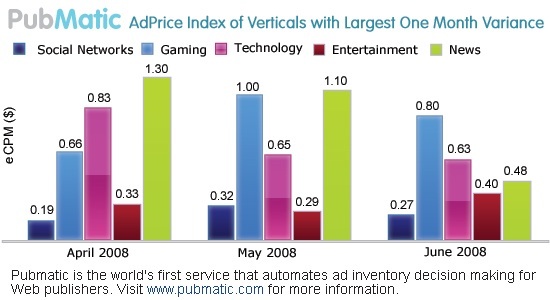 (You can find more details from the report here.)

Industry watchers have been predicting that, while online ads are generally safe from sharp revenue drops versus traditional media formats, the online ads that will do best are the ones that can prove how they help advertisers make money. Google’s search ads are the shining example. Entrepreneur-blogger Andrew Chen recently posted some thoughts along these lines, but he concludes with this upbeat note worth keeping in mind:
[I]n the advertising world, particularly in new media channels like online advertising, timing is everything. The brand-oriented web properties that exist today were built in the 2003-2005 era, when brand advertising wasn’t so healthy. Similarly, Google was created during a period where online ads was out of vogue, and they had to figure out a model that works. For the new startups that are building their business plans from scratch today, I think there remains tremendous opportunities in the advertising-supported model. It pays, as many investors can attest, to be counter-cyclical. Perhaps the startups being incorporated this year who reach scale 3-4 years from now will be the ones that really kill the TV ad market by doing things we can’t even imagine today.

For ad networks that have relied on sales to make money, now is the time to look at building out technology that can actually make advertising more valuable. Of course, many companies have various claims about how well they can target ads based on the context of a web page, or on the behavior of a user. A recession will sort out who can and who can’t really accomplish such feats — without violating users’ privacy, of course.