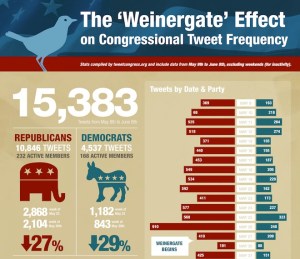 Representative Anthony Weiner’s embarrassing tweet has had a chilling effect on congressional Twitter use, an analysis by Tweetcongress.org shows.

But there’s another mystery contained in TweetCongress’s infographic: Why do Republican representatives use Twitter so much more than their Democratic counterparts?

Over a period of several weeks, TweetCongress recorded 4,537 tweets by 168 Democratic members of Congress. In the same period, the site counted 10,446 tweets by 232 Republicans.

That’s 2.3 times as much Twitter activity from the right wing than the left.

The analysis, reported by Mashable on Friday, focuses on the aftermath of the discovery that a photo showing someone’s bulging underpants had appeared on Weiner’s Twitter account. Weiner promptly deleted the tweet (and later blamed it on hackers), but TweetCongress recorded the post, which was later picked up by Andrew Breitbart at BigGovernment.com.

TweetCongress’s infographic shows that after those revelations, the number of tweets by Republican members of Congress dropped by 27%, while those of Democrats dropped by 29%. No wonder — our elected representatives are probably being a bit more cautious about what they post, now that they see how embarrassing a misdirected tweet can be.

But it’s still a bit of a mystery why the Republican party has embraced Twitter so much more than the Democratic party. Any ideas?