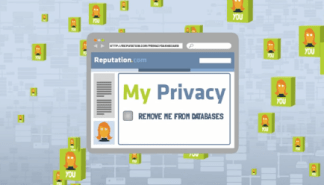 Consumers will be able to charge advertisers to access their personal data.

The company making it possible is Reputation.com, an online privacy company that just picked up a $41 million round led by August Capital.

However, the details of the product, still under development, are unclear.

Michael Fertik says it’s designed to put consumers in control of their own data.  “It’s like a vault where they can put data and get paid for it themselves,” he explained in an interview with VentureBeat. Advertising is one of the biggest business models behind the Web, and consumers should be able to leverage that, according to Fertik. One way is to seek payment when such data is sought for by advertisers.

While the idea of having control over my data enough to monetize it is tempting, I think I’d want to know more about the back-end processes Reputation.com engages in. Here the details are frustratingly vague — especially for such a sensitive proposition.

After the interview, I was left with no details about how the company farms my data from the web, and slightly creeped out.

Indeed, much about Reputation.com’s existing product is unclear. The company’s main offerings defends customers against negative mentions in search results. It monitors the internet for relevant content about their customers,  and somehow — it won’t quite say how —
Reputation.com says it makes negative posts appear lower down in search engine rankings. (See image for an example of before and after). 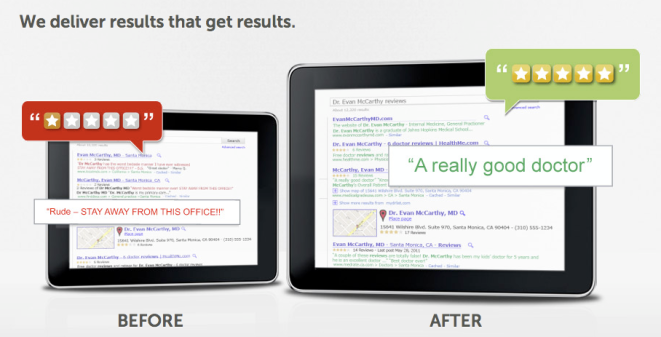 But here too, Reputation.com doesn’t explain how. Fertik, answered only: “There’s a lot of math involved.” The company even says it can remove personal information entirely. Again, no details. (In years past, the company contacted sites directly to encourage them to remove undesirable content. Fertik explained that Reptation.com no longer makes these requests.)

Finally, when we asked the company’s PR person for more information about how personal information is removed from the web, they refused to divulge anything. I bet there was a lot of math involved.

To be fair, some of this information is what makes Reputation.com successful, it’s the secret sauce. The PR person explained, “This expertise is something we hold close; it is one of the skills that makes us most valuable.”

Though, the secret sauce is to remain hidden, there’s something to be said for allowing search engines to provide results naturally and not hide negative commentary. VentureBeat asked whether Fertik believed “controlling” search engine rankings might skew the truth a bit, rendering an inaccurate portrayal of the searched subject. To believe you are getting an accurate portrayal in the first place, he said, you have to believe that “Google is pristine on its own, you have to believe that Google is perfect,” implying accurate portrayals are unrealistic:  “Google is just a machine, it’s not God, it’s a machine.”

Fertik used the example of an ex-boyfriend posting slanderous comments, which you’d naturally like to suppress in search rankings for your professional profile.

That is undeniably desirable, but the flip side is the mother who needs to know if her nanny is actually trustworthy or the consumer who wants to know how reliable their dry cleaner is. What’s to prevent shady characters from using Reputation.com to slant their online profiles toward the positive? The company says it it has clear policies about this, saying it doesn’t serve criminals. But I’m not talking about criminals per se, I’m talking about all that gray in between.

Reptuation.com was founded in 2006 and has 150 employees. Funding to date is around $66 million from August Capital, JAFCO Ventures, Bessemer Venture Partners, Kleiner Perkins Caufield & Byers and Floodgate Fund.