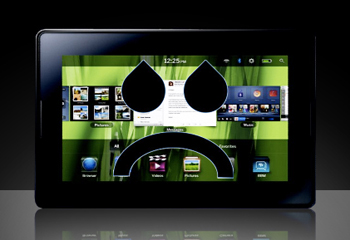 If BlackBerry fans weren’t already angry at Research in Motion (RIM) for the recent worldwide BlackBerry outage, they’re going to be peeved today. RIM has said it is delaying the release of a much-needed software update for the PlayBook tablet until February.

“As much as we’d love to have it in your hands today, we’ve made the difficult decision to wait to launch BlackBerry PlayBook OS 2.0 until we are confident we have fully met the expectations of our developers, enterprise customers, and end-users,” the company said on its official blog.

Research in Motion has struggled to keep up with its mobile device peers, especially Apple and Google’s Android manufacturing partners. The company has said repeatedly that its PlayBook tablet and a new smartphone OS, called BBX, would help lead the company to a new phase of innovation, but a 4-month update delay makes those promises seem far-fetched. RIM shareholders must be wondering how much longer the company will hold out because even much-maligned Nokia is getting its act together and releasing slick-looking Windows Phones.

On top of delaying the OS update to the BlackBerry PlayBook, RIM said the update still won’t include an application for BlackBerry Messenger, one of the most popular apps RIM has ever offered. Messenger only works between two BlackBerry users, much like Apple’s new iMessage program, and it does not charge a user for text message.

“We are committed to developing a seamless BBM solution that fully delivers on the powerful, push based messaging capabilities recognized today by BlackBerry users around the world and we’re still working on it,” RIM said. “In the meantime, BlackBerry smartphone users will be able to continue to use BlackBerry Bridge to securely access BlackBerry Messenger on the BlackBerry PlayBook tablet’s high resolution display.”

Without any top-tier competitor to smartphones, such as the Apple iPhone 4S or Samsung Galaxy Nexus, or a compelling tablet update to help the PlayBook compete with the iPad or Kindle Fire, RIM is looking at a bleak holiday season. Maybe RIM’s shareholders should ask Santa for new management.