I have enough stress in my life. I’m a parent to a young kid. We’ve got another one arriving any minute now. The future seems uncertain, and every moment feels like things are only getting more out of control. So I don’t go looking for more stress. And that would be a problem for a tense horror game, but somehow Capcom’s Resident Evil 2 remake is getting by just fine.

Resident Evil 2 is the latest entry in the long-running survival-horror franchise. It is due out January 25 on PC (reviewed), PlayStation 4, and Xbox One, and it is a complete reimagining of the original 1998 PlayStation release.

Capcom retained the setting, characters, and basic story of the original, but the publisher also incorporated elements from other games in the series. Resident Evil 2 uses the same RE Engine that powered the atmospheric and beautiful Resident Evil 7. And like Resident Evil 4, this remake uses an over-the-shoulder camera perspective to put you closer to the action.

The result is a Resident Evil that is scary but also packed with excitement.

Action and horror together at last

Resident Evil 2 introduces a hacking tool to solve puzzles about halfway through. At the same time, it strips many of your weapons away from you and handcuffs your ammunition. This makes you vulnerable, and in this part of the game, a massive enemy makes regular attacks against you.

With almost no ammo, I began putting three bullets into the thighs of every zombie. This strategy causes their leg to fall off, which slows them to a literal crawl. That gave me enough time to solve the puzzle in the room and move along.

That’s when two things happened: I found a locked door. And the large boss-style enemy showed up right behind me.

I only had 9 rounds. So I aimed down sights and waited for my reticle to shrink to ensure accuracy. It was a tense moment, trying to line up the shot with the over-the-shoulder perspective and the enemy barreling straight at me. But when I had everything just right, I unleashed 9 rounds right into the behemoth’s face.

Above: Resident Evil 2 is extremely beautiful at times, and it is always moody and atmospheric.

Somehow, I had just enough bullets to stagger the giant. It didn’t kill him, but it stopped his progress. That gave me just enough time to remember I had a door to unlock. I pulled out my hacking tool and got through just as the monster was getting back to his feet.

This encounter is indicative of everything that Resident Evil 2 is great at. It’s horrifying. I was scared. But the solution wasn’t just to run away or hide. I had to fight back just long enough to create an opportunity to escape.

Capcom struck an ideal balance between horror and action, and that is why this remake works so well. Yes, it is stressful. I would almost call it too stressful for a fragile guy like me. But the fights give you just enough space to punch back that you feel like you can create some breathing room.

The most multifaceted Resident Evil ever

If you’re here for the lore and characters, Resident Evil 2 nails it. Are you looking for a zombie game with modern graphical tech, Capcom’s got you. If you want something that is intense and full of action, this is a bingo. 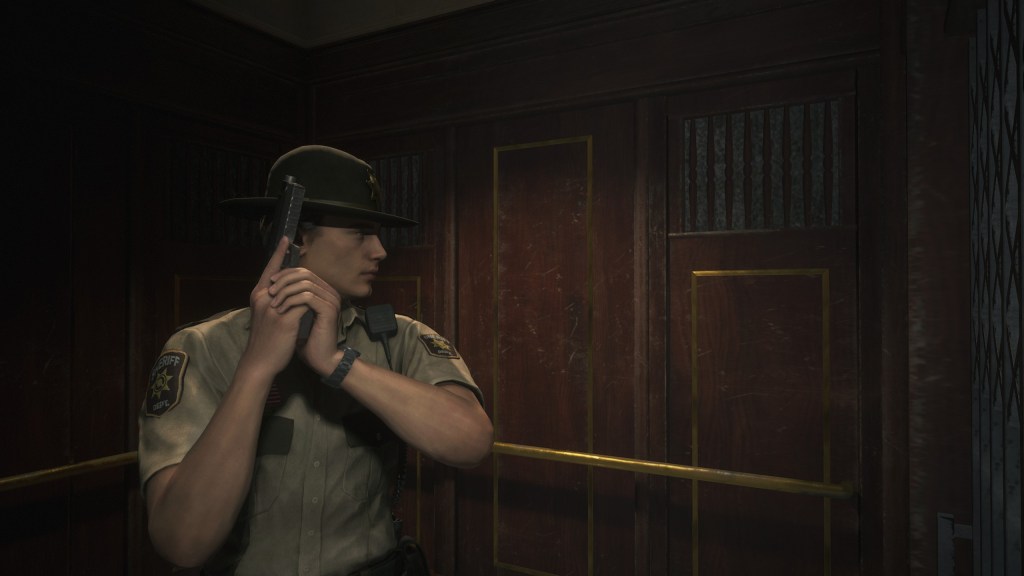 Above: Leon Kennedy is not Rick Grimes.

But Resident Evil 2 also plays all of its various aspects off of one another really well. It has bigger and badder enemies to break up the monotony of the slow-moving zombies. And to break up that combat, it has the charming old-school puzzle design where you open secret passages with a medallion. It is a smart game for modern players who are looking for multifaceted gaming experiences.

Stiff controls and a map problem

Aiming and firing your weapon in Resident Evil 2 feels nice. But moving your character around the world is still a bit awkward. It is a huge improvement over the tank controls from the early games, but I still find myself struggling to get my character to move exactly where I want. And that’s a problem when it results in a zombie getting close enough to give me a nip on the neck.

I also found myself opening up my map every five steps at a number of points in the game. The dark police station is tough to navigate. And just as you get the hang of things, it opens up a new area. And when something giant and impervious chases you, you don’t want to go down a dead end or anything.

It’s scary, but it’s not that scary

Resident Evil 2 isn’t as scary as I was expecting. It is stressful, but it’s not the nonstop nightmare fuel that Resident Evil 7 was.

It is still stressful, but most of that comes from a sort of situational horror. Almost any game would cause you stress if you had to make it from one side of the map to the other with a wounded character, no health items, and 2 rounds in your weakest hand gun. 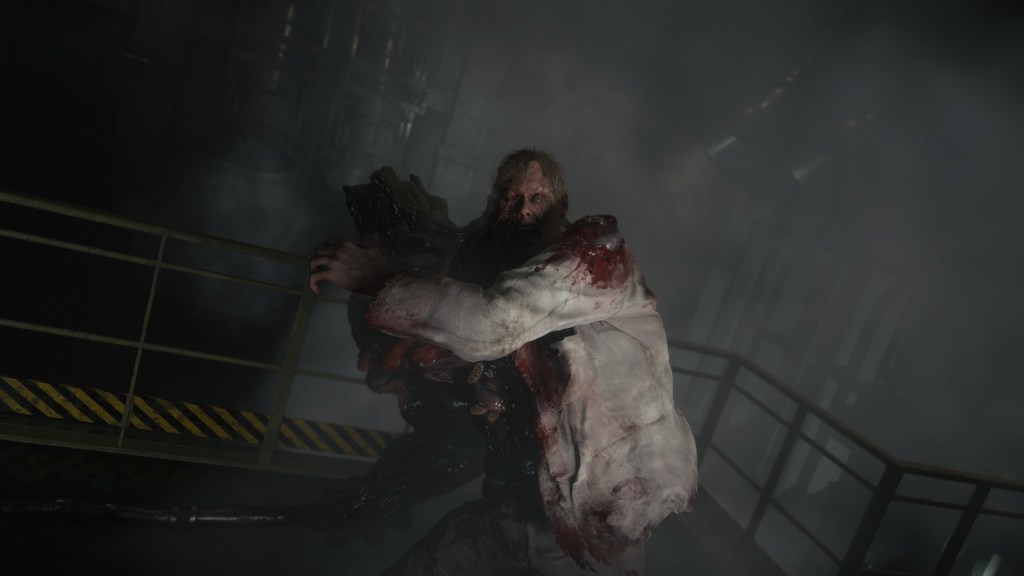 Above: A metaphor … probably for the president or something.

The zombies, the lickers, and the rest of Resident Evil 2’s cast of undead just don’t frighten me much anymore. I’m probably just desensitized at this point, but I was expecting Capcom to do more.

Resident Evil 2 is going to click with a lot of people, and those folks are going to love it. I still really enjoy it even if it didn’t fully click with me. But my issues with this game are just a matter of taste and not execution. I prefer the Resident Evil 4 style where I have enough ammo to just blast my way out of every situation.

But what’s great about Resident Evil 2 is that it’s still a really fun and well-made experience even when it drives someone like me out of their comfort zone. That’s the sign of a strong game.

Finally, Capcom has put a lot of game into Resident Evil 2. It has four remixed campaigns — two each for the playable characters Leon and Claire. But Capcom has also revealed plans to add even more. That includes a mode that randomizes where items are as well as new player characters.

It’s a good time to be a Resident Evil fan again.

Resident Evil 2 hits PC, Xbox One, and PlayStation 4 on January 25. Capcom provided a download code for the purpose of this review.