Google has received a lot of feedback about its decision to switch the keyboard shortcut for going back in Chrome — from the backspace key to alt + the left arrow key — starting in Chrome 52, which Google launched in the browser’s Stable channel on July 20.

People working on Chrome initially said that they would add a flag so that users could decide to use the new shortcut instead of the old one. But that option ultimately got ruled out, and so now, if you’ve updated Chrome to version 52, you may have received a pop-up message in Chrome informing you of the new keyboard shortcut for going back. I did, and I was not happy about it. 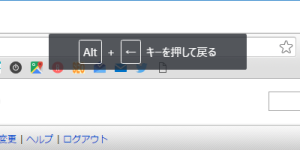 Above: The pop-up message in Chrome as seen in Japanese.

One reason Google cited for making the change is years of complaints about how hitting the backspace button, sometimes by accident, caused the browser to go back a page and inadvertently lose data entered into a text box. (Personally, that has not happened to me very often, but I understand the argument.)

Google software engineer Ojan Vafai has indicated that 0.04 percent of page views go back with the backspace key. But Chrome now has more than 1 billion active users, so 0.04 percent could mean 400,000 users. And backspace-for-back devotees have been vocal.

Fortunately, for the backspace-as-back loyalists, two recently launched Chrome extensions immediately restore the banned shortcut: Backspace to go Back from Adobe engineer Razvan Caliman, and Back to Backspace from Stripe engineer J Delaney.

For those who want even more control over Chrome, there is an extension called Shortkeys, from Mike Crittenden, a software architect at software development firm Phase2. Shortkeys lets you install whatever keyboard shortcuts you want — and disable native Chrome shortcuts, like the new alt + left arrow key.

Once you’ve installed Shortkeys, click on its icon in the toolbar, select Options, type “backspace” in the Keyboard Shortcut field, select “Go back” in the Behavior dropdown menu, type in a label in the “Label as” box, and hit Save.

As the extension points out, you’ll need to refresh each page in order for new shortcuts to work.

Update on August 17: Google has released an official Chrome extension for restoring the backspace-for-back functionality, called Go Back With Backspace. It’s available here.