App developers and publishers have always been challenged to find ways to keep users engaged within their apps while maximizing revenue earned per user. How to keep users coming back to the app? How to figure out that secret to stickiness? How to increase revenue without losing visitors?

It’s far more expensive to acquire new users than it is to keep the current user base engaged within an app. In fact, the cost to acquire a new user is steadily increasing. Fiksu shows the Cost Per Purchaser (CPP) index has risen over 1 percent on iOS and over 19 percent on Android. With fierce competition in user acquisition campaigns, that cost will easily increase within the next year. This doesn’t take into account visitors who are engaged within an app and abandon it later. The vast majority of new users who download an app churn within 30-90 days. This triples the cost of an engaged acquired user.

The key then is figuring out a business model that ensures the cost of acquiring a user is less than the amount a publisher earns from that visitor. And more importantly, to figure out how to increase revenue while keeping users engaged.

One way to keep users coming back is to reduce the friction between player satisfaction and revenue growth. The biggest offender? Display ads. Display ads frustrate users and result in earning a small piece of revenue while risking permanently losing a customer. Display ads take over valuable real estate on smaller screens and slow down loading times for apps and games. Customers lash out by implementing ad blockers, resulting in even more lost revenue for a mobile publisher. According to PageFair’s 2016 Mobile AdBlocking Report, almost 5 million content blocking and in-app blocking apps have been downloaded from app stores in Europe and North America since 2014.

One way to effortlessly bridge the gap between revenue and user satisfaction is to reward users for desired behaviors. Rewarded ad slots — in which users are asked if they want to participate with ads, videos, or surveys in exchange for something valuable within an app — provide instant gratification for consumers. There are no intrusive display ads hindering their use of an app — it’s a completely opt-in model, which leads to better performance overall.

The key is to insert these rewarded ad slots in natural places within the app. For example, when a player advances to the next level in a game, a publisher can give them the option to interact with a rewarded ad and earn additional currency in the game for this achievement. Rewarding a player in a place of achievement or advancement within the app increases user engagement. Offering these incentives throughout the app helps guide the player through the progression of the game, motivating them to advance to the next phase of the app. This allows the app to be part of a user’s daily routine.

Another opportunity for a rewarded ad spot is when users are stuck within your app. Giving players the option to interact with a rewarded ad or survey in order to advance allows users to continue to interact with the app longer. Think of it as a lifeline that leads to less friction and frustration for the player.

Although it may be tempting to clutter an app or game with various forms of advertising, it’s important to strike a balance between game or app usage and ad interruptions. For example, you can limit a player to watching a rewarded video or taking a rewarded survey only three times a day. Players will come to realize these ad lifelines only come on occasion. This leads to higher interaction rates when the ads do appear in app, and ultimately, better performance and higher revenue. Other options to increase stickiness while maintaining a balance with advertising include:

Reducing friction and rewarding users in natural places within an app allows for greater user gratification. Once a balance has been struck between all these variables, stickiness and revenue growth will follow. 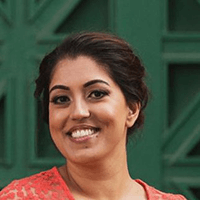 Jazz Sahota is head of publisher development at Survata driving the adoption of Survata’s SurveyWall across both web and mobile publishers. She graduated from the University of California, Berkeley.