No sooner does the NYT run a significant piece on health-info efforts at Google and Microsoft than someone decides to leak the “preview” of the site to Google Blogoscoped. (Site author Philipp Lenssen confirms that it wasn’t an authorized disclosure.)

Based on the ten screenshots available at Lenssen’s site, this preliminary version of Google Health is indeed laser-beam focused on creating a personal electronic health record — a digital version of the paper files your doctor probably keeps in one of those vertical filing cabinets. Given the unlikelihood that users will be able to simply upload their information from their doctor — as I seem to be repeating a lot these days, fully three-quarters of U.S. doctors still keep medical records on paper — the initial emphasis is on getting users to enter as much of their personal information as they feel comfortable providing.

To that end, the early version of Google Health offers the standard spare-but-clean Google interface. As you can see from this screenshot, the section is divided into “Profile” and “Medical Contacts” tabs. “Profile” is where you’d enter your medical details — everything from straightforward descriptive details (age, sex, height) to immunizations to current medications, surgeries, and family history. Presumably Google will refine some of these options over time — this screenshot (duplicated below) of the “Conditions and Symptoms” tab, for instance, offers choices such as “head and neck angioedema” and “head and neck carcinoma,” which ordinary people aren’t likely to understand unless they already have these conditions. (Angioedema is a fluid-based swelling of the skin and mucus membranes, while a carcinoma is a type of cancer.) 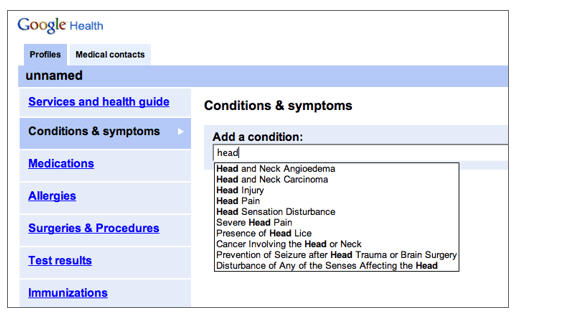 One of the cooler features hinted at in this preview is a customized “health guide” the site will put together once you’ve entered enough information. As the site text reads, “When you add some information to your profile, Google Health will search trusted medical sources and create a health guide targeted for you.” In other words, Google plans to offer some preliminary diagnoses for users who trust it with their medical details. This part of the site is currently built in collaboration with SafeMed, an automated-diagnosis startup that we covered briefly here. It will be interesting to see how medical authorities react to this sort of automated, personalized diagnosis, as it might skirt fairly close to the actual practice of medicine in some states. The preview site does urge users to “[b]e sure to discuss questions about your medical care with your doctor or medical provider before making changes.”

The remainder of the preview site is fairly straightforward so far as health information goes. The “Medical Contacts” page turns out to be a blank box that offers the option of searching the “Google Doctor Directory” to add your current physician or physicians. There’s no sign as to whether that directory actually exists or not, or whether it will be compiled with human oversight or automatically assembled in the fashion of other Google directories.

Overall, it seems a solid but unremarkable effort, one that probably wouldn’t even merit much attention were it not from Google. Of course, that makes all the difference, since a groundswell of patients who want their doctors to use Google medical records might actually encourage more doctors to adopt electronic systems.

In the meantime, for comparison, you might check out some other early efforts to do something similar, such as the OpenHealthRecord or the more sophisticated but less user-friendly HealthCapture PHR.

UPDATE: Tom Salemi of the In Vivo Blog has an even more dyspeptic take on both the NYT story and the Google Health preview — not to mention a decent joke based on one of my favorite bands — here.

UPDATE REDUX: Another underwhelming review is up at MedGadget, while at Over My Med Body!, Graham Walker — a third-year Stanford med student — rails that “Patients should not control their medical record,” and then explains why. The comments to Walker’s post further expand on the issue of just how good an idea it is to let people enter their own medical information, and whether that should complement doctor-provided information or even override it if the patient so chooses.