The current state of computing is always under scrutiny and speculation. For years laptop and desktop computers have been proclaimed dead, most recently in the face of smartphones and tablet computers. OnLive Desktop may be the first sign of an evolution for everyday PC computing, one that would silence naysayers and utilize all types of application-driven computing devices.

OnLive Desktop – from OnLive, the Palo Alto, Calif.-based cloud-gaming company – is a Windows 7 work environment, streaming from the cloud, as a simple downloadable app. Using the same technology from its OnLive cloud gaming client, OnLive Desktop promises to deliver a desktop computing experience on tablets and smartphones. In this way, all devices do is display what’s on the Windows desktop and provide touch feedback. All of the processing is done on the backend. OnLive CEO Steve Perlman unveiled OnLive Desktop at the recent Consumer Electronics Show.

The significance of OnLive Desktop is that, in time, users will be able to have a full Windows computer in the cloud, as long as they have a free app and an Internet connection. Currently the service is limited to the iPad, though it is scheduled to be released for Android, other iOS devices, Windows, and OS X. This review is of the OnLive Desktop Standard edition. Pro and Enterprise versions will release in the near future with more features. 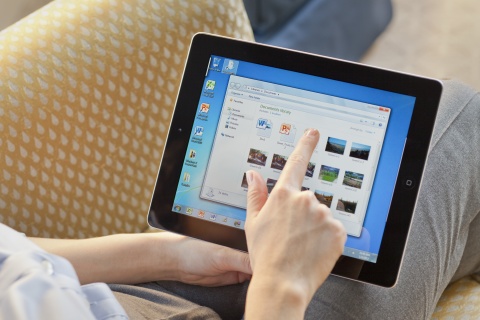 OnLive Desktop isn’t just a bare Windows 7 workspace. It comes with applications available for immediate use, including Microsoft Office Word, Excel, and Powerpoint, along with basic Windows applications such as Paint, Media Player, Notepad, Calculator, etc. All of the basics you would expect from a Windows 7 machine are immediately available through OnLive Desktop.

There are a few key differences, mostly from the operating system. It isn’t your typical Windows 7 Home or Premium edition; instead, it’s Windows 7 Touch, designed specifically for touch-enabled devices. We’ll get to touch performance later on, but that means is that the entire OS works similar to the Microsoft Surface table: a multi-touch surface in a Windows environment. Several Surface applications are included, such as Microsoft Surface Collage, and a handful of Surface games.

After a basic login screen, users are dropped at the standard Windows 7 desktop. The available Office applications, a folder of Surface apps, sample Office documents and the Getting Started Guide are all that sit on the desktop. For all intents and purposes, it is a Windows-based machine on an iPad.

However, there are specific features missing on the Standard version of OnLive Desktop. There is no web browser. OnLive has struggled to find a solution to provide a web browser that handles all the data on their servers, but simultaneously doesn’t go to dangerous websites that could harm the servers. OnLive Desktop Standard does not have a built-in web browser, but then again iPad owners can just switch into the iPad’s Safari web browser, and go back into the OnLive Desktop when done. The bigger letdown is that copied material isn’t saved to the Windows clipboard, so copied text or images can’t be pasted to Windows.

Settings cannot be adjusted for the Windows machine either, at least not yet. I found the touch cursor is slightly off, but there is no way to adjust it. No other functions can be adjusted whatsoever.

Documents and data can be transferred to the OnLive Desktop through any computer by uploading directly to OnLive’s website. After logging in, users can upload up to 2GB of data (pay-for subscriptions will include more space). 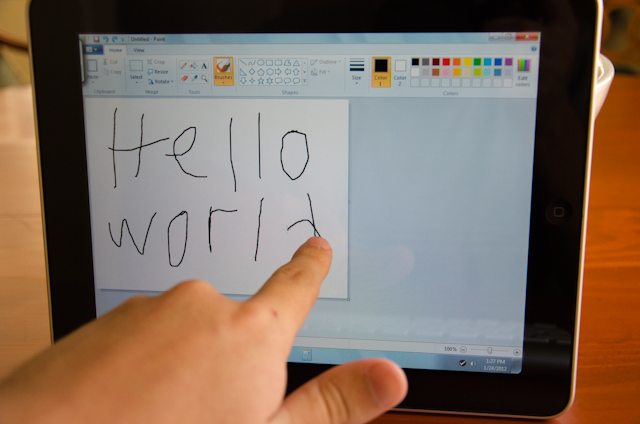 The biggest difference between a native Windows computer and the OnLive Desktop app is, of course, that the latter is streaming. Unlike OnLive’s gaming client, which streams games through computers, tablets and smartphones, the video compression algorithm is different and made more suitable for standard desktop computing. It makes sense from a theoretical standpoint – videogames are far more intensive than, say, a Powerpoint presentation, which is almost constantly static.

The video compression, or how Windows looks on the iPad, is solid, but rarely clear or crisp. While typing several articles using Word, sometimes the text would be too difficult to read on the screen, even with an excellent Wi-Fi connection. In fact, how strong the connection is makes almost no difference in the quality of video, unless it’s a poor connection to begin with.

What lowers the screen quality is, in fact, heavy use of the app. Typing articles, for instance, using an external keyboard (the Windows on-screen keyboard is absolutely awful; to take full advantage of everything OnLive Desktop has to offer, use a Bluetooth keyboard) constantly sends data up and down, to and from OnLive’s servers. It may be just a few bytes at a time, but the constant hounding seems to lower quality of video regularly. Every minute or so the screen quality dropped severely, but would return to visible quality in a few seconds.

To get crisp, clean visibility requires users to not upload data consistently. In other words, the less you do – for instance, the less you use the touchscreen or the less you type – the less data is uploaded to OnLive’s servers and slowing down the connection. Watching videos, reading documents, and showing Powerpoint presentations all provide high quality visuals.

More intensive applications like Microsoft Surface Collage, where users can manipulate photos by touch, don’t appear as distorted or pixelated as text-based apps. Graphically-intensive applications also have data processed by more powerful servers, though for now it’s too difficult to tell whether or not that is occurring here.

Lag time is, for the most part, nonintrusive. Typing documents, creating Powerpoints, and almost every other task has slight and noticeable lag, but it isn’t a bother. Lag is most visible when using apps like Paint, where it may take a half-second for the paintbrush to reach where you’ve drawn. The lag currently present will not cause any workflow problems, at least for the currently available applications. 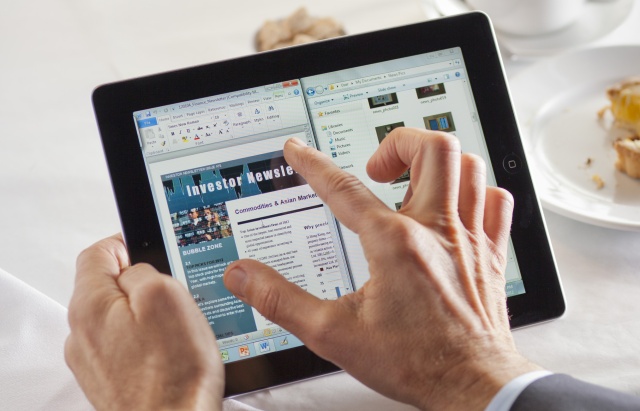 Today, OnLive Desktop is a solid application client that has all the basic functions of a Windows computer freely available for all iPad users. Along with the basic Office apps and the Windows 7 Touch environment, OnLive Desktop has the potential to change the way we use tablets and smartphones, and perhaps even PCs. With a Windows-based machine as readily available as an internet connection, this technology may be paving the way for the future of cloud computing.

There are, however, severe limitations with what can be done currently with the service. File support is minimal, there are only a few applications currently available, the display quality is mediocre regardless of the internet connection, and there is no personalization whatsoever. Even with these misgivings, as a free service for anyone with an iPad, and soon with an Android or iOS based device, there is nothing like OnLive Desktop anywhere. VPN offers a similar solution, but it isn’t cloud based and requires a separate computer for users to manage. With OnLive Desktop, someone else handles everything. And an exceptional side effect to the service is because it runs on tablets, which generally have excellent battery life, running OnLive Desktop actually lasts longer than a traditional laptop.

For now, OnLive Desktop Standard shows a taste of what’s to come with future service plans. There are plenty of improvements to be made on the service today, but I recommend all iPad owner download the free application and try it out. OnLive Desktop opens the first gateway into actual cloud computing, with a full desktop workspace. Apple may believe that it is cannibalizing Windows PCs with monstrous sales of iPads, but with a service like this, more people than ever may start using Windows in ways never before imagined.