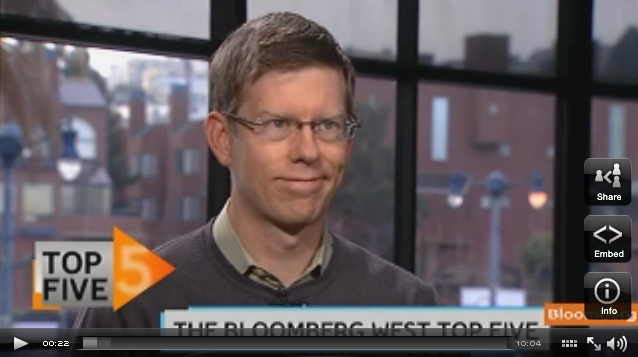 Anyone can pick most interesting phones of 2011, but it takes real foolhardiness to predict the most revolutionary products of the coming year.

Call me a fool. I’m placing bets on these five products that will revolutionize technology in 2012.

I made these predictions recently in a TV segment on Bloomberg West with host John Erlichman. Click the picture above if you want to watch the video. And now, on to my predictions. 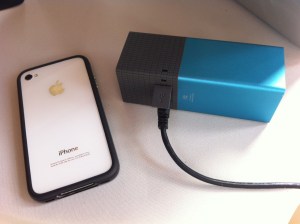 Announced in late 2011, but not actually shipping until early next year, the Lytro Camera uses a revolutionary “light field” capture technology that records not just the intensity and color of light rays but also their direction. That means it can reconstruct an entire visual field without having to focus. The practical upshot is that you can focus the image after you’ve shot it — or, in principle, create images that have infinite depth of field.

Until recently, the technology was only available in the lab and required supercomputer-like processing to work. Lytro has made an ambitious attempt to turn this into a working product.

At $400, it’s an expensive gimmick right now, and it doesn’t actually produce particularly good images yet. But if the Lytro camera doesn’t change the game, other cameras using similar technology may do so — with potentially revolutionary effects on photography. 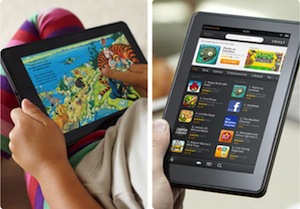 Amazon’s Kindle Fire has apparently sold very well, although Amazon hasn’t disclosed exactly how many of its new tablet device it’s shipped. And it got many things right, from the price to the integration with Amazon’s music, video, and apps content. But the Fire is full of boneheaded flaws, including its lack of volume controls, an often laggy and imprecise touch interface, the lack of parental controls and more.

Still, Amazon has shown that it knows how to learn from its mistakes and make the second version of a product far better. Its first Kindle was pretty good, but the second version really blew away any remaining competition. Look for the company to pull the same trick with the second act of the Kindle Fire, whatever they decide to call it. (My suggestion: Kindle Bonfire.)

Because Amazon is one of the few companies (other than Apple) to pull off the complete integration of content, apps and software with its tablet hardware, I think an improved Kindle Fire could be an incredibly powerful competitor in the tablet market. 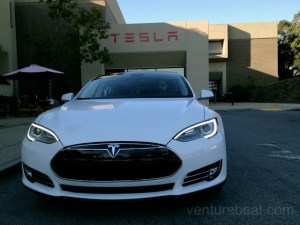 With a 300-mile range and a zero-60 time of just 5.6 seconds, the Tesla Model S will blow away all other electric cars in terms of performance. The closest competitor, the Nissan Leaf, only gets 80-120 miles on a charge, depending on how you drive it. So while the Model S’s $50,000+ sticker price is pretty steep, a lot of people will be willing to pay that premium.

If the company can ship the Model S in 2012, it ought to do quite well. And if it does well, it will be a vindication of Tesla’s market strategy. Unlike most electric car makers to date, which have started at the bottom of the market and then worked their way up, Tesla started with its fast, powerful, sexy and expensive Roadster. Once it demonstrated the technology with a high-end car, it started work on a midrange sedan. In essence, it used its luxury model to subsidize development further down the market. That approach has paid off with the Model S’s promised range and speed, and could potentially give Tesla a huge advantage for years to come. 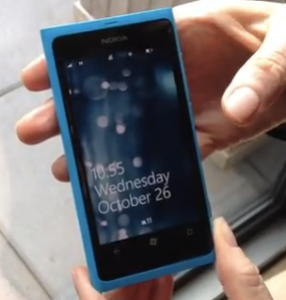 2012 is the make-or-break year for the Microsoft-Nokia partnership, as Devindra Hardawar recently argued. If the companies can pull it off, though, the partnership will be a serious threat to Android, which is increasingly fragmented. Windows Phone is a slick, well-designed operating system that just feels better put-together than Android. If the two companies can work with carriers to get their phones in the hands of consumers, they stand to peel off a significant piece of Android’s market share.

The Nokia Lumia 800 and 710 are the two first fruits of the partnership, and they’ll be coming to American shores in early 2012. The Lumia 800 is competitive with other high-end smartphones, but I’m especially interested in the potential of the 710: It’s a cheaper ($100 with contract) smartphone that could really shake things up on the low end of the smartphone market. Up to now, those who want cheap smartphones have to put up with crummy, out-of-date Android models. A cheap phone that doesn’t suck would be a welcome alternative for many of us. 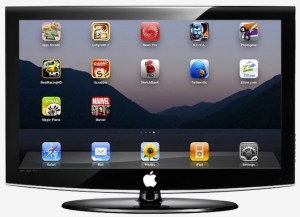 Some sort of Apple television has been a staple of Silicon Valley’s rumor mill for years, but there are good reasons to think it really will materialize in 2012. Rumors coming out of Asian component manufacturers, analyst reports and even a line in Steve Jobs’ biography all suggest that an Apple television is just around the corner.

It will likely be based on the company’s existing Apple TV, but integrated into an actual television set, so we’ll call it iTV to distinguish it from the current set-top box. To make this work, Apple will have to find a way to bridge the navigation of Internet- and locally-stored video content (which the Apple TV already does) with the ability to watch real-time TV from cable, satellite or over-the-air sources.

I expect that the iTV won’t initially be aimed at replacing the big-screen home theater TV that many people have: Instead, it’ll be intended for use as a second (or third) screen, in a kitchen or a bedroom, where you might also want to get access to games, recipes, weather, stock reports or other apps. In short, it’ll be a TV but it will also play to the strengths of Apple’s iOS.