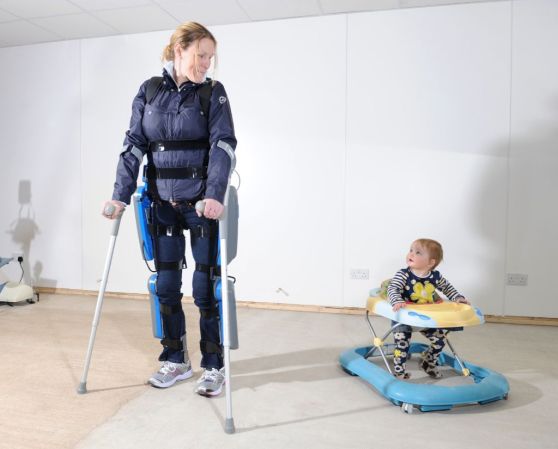 A man in a wheelchair stands up and takes his first step in many years. Attached to his legs and waist is a robotic exoskeleton called the ReWalk which helps him to stand, sit, walk and even climb stairs. One person, Claire Lomas, even completed the London marathon in one. Argo Medical Technologies, which makes the ReWalk suit, just released a new version for use in rehabilitation centers in the U.S.

Over 100 people are already walking around Europe and Israel in a ReWalk Personal and, pending FDA approval, the suit will be available for personal use in the U.S. in the second half of 2013. ReWalk Rehabilitation is already helping patients in 16 rehabilitation centers across the United States.

Israeli electrical engineer Dr. Amit Goffer designed the ReWalk suit. He became a quadriplegic following an accident in 1997. Goffer devoted 10 years to developing a device that would help a paraplegic to walk again. Such devices, like metal frames with springs, have been around for at least 50 years but required an enormous effort from the user. “It was extremely tiring for an individual to take 10 or 15 steps. A key element of the ReWalk design was that the energy requirements of the user should be no different from that of someone who was not injured,” says Argo Medical Technologies CEO Larry Jasinski.

Goffer developed a robotic exoskeleton that attaches to a person’s legs and waist and can bear the weight of both the user and the device itself. Shifts in the user’s center of gravity control the suit, somewhat like riding a Segway. The suit’s motion sensor can detect a very small movement of say 4 degrees and send a signal to the bionic legs to begin to move. A backpack carries the suit’s battery and software. The ReWalk is used with crutches purely for balance. The suit’s software includes safety features that detect if the user is about to fall.

ReWalk Rehabilitation 2.0 can be more easily adapted to users of different heights and weights and has a beginner-gait mode with improved software to support new users as they learn to take their first steps. Patients need training to learn how to use the suit (an average of 15 sessions), but some have been able to walk unaided in the third session.

Purely because they spend their time in a wheelchair, paraplegics experience depleted bone density, rising body fat, diabetes, declining cardiovascular fitness, severe bowel problems, and pain. Argo Medical technologies is involved in two clinical studies on the effect of the ReWalk suit on patient’s general health. “We are evaluating what you do to the overall metabolism of a person when you let them walk again. Our patients are almost universally showing reduced body fat, increased lean tissue and improved cardiovascular function.”

The ReWalk is currently available in Europe and costs €52,500. The price Stateside is expected to be around $65,000. The price tag may be steep, but Jasinski told me that the overall cost of care for ReWalk users drops considerably. “We believe that the health impact will more than pay for the cost of this device.”

The company is developing a product for quadriplegics (patients who also cannot use their arms) that is similar to the current suit but will have crutches integrated into the system and is looking at many other medical applications where people cannot walk because of a stroke, Multiple Sclerosis or Cerebral Palsy. Users are, however, still waiting for a dance mode.