Ribbit is a remarkable new company, and it knows it: It calls itself “Silicon Valley’s first phone company.”

That sounds like marketing overreach for a young company barely launched, but when you look at what it’s doing, you can see why they can get carried away.

Ribbit, based in Mountain View, Calif., has developed technology, built on years of prior work of its founders, that lets a developer insert phone software into any Web application. The developer doesn’t have to know anything about phones.

The end result, Ribbit predicts, will be thousands of useful applications for regular people. Ribbit’s applications let you make calls from any page, direct your calls from your own phone to any Web page, and gives you a way to manage it all in new ways. You can transcribe it all into text, search it, and use it to see other kinds of information. Because it can integrate into any application, Ribbit can do things like peer into your friends’ MySpace, Flickr or other accounts, pulling your friends’ latest blogs or photos, so you can consult it all even as your friend calls you on the Web phone.

The company first launched in December, as a platform designed for developers building phone-based applications for large companies. To showcase this, Ribbit built Ribbit for Salesforce, which adds voicemail, memos and calling to your Salesforce account, so you can manage all your clients with your web-based phone. The person who built the application, a former Salesforce engineer, knew nothing about phones.

Today, at the DEMO conference, Ribbit announces the launch of a platform for consumer applications. It’s called Amphibian, and it already has some notable applications on display. About 2,500 developers are building Ribbit applications, the company tells VentureBeat. There’ the Ribbit version of the Adobe AIR iPhone, which builds on the popular application AIRiPhone. Thae original application features an iPhone suspended in the air on a Web page, and lets you play with its data, turn it around and so on. Ribbit’s application, however, has added a way to include your own phone’s features within it and make calls.

There’ also the Chalkboard phone, which lets you make calls from your computer with a Flash-based phone, designed like a chalkboard. See iGoogle screenshot here. 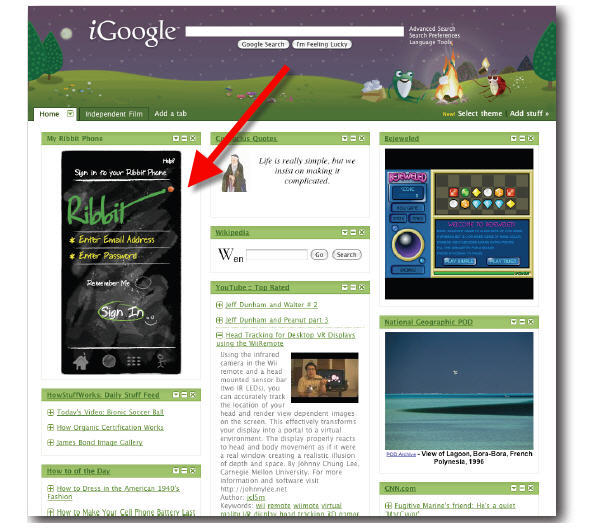 The company was co-founded CEO Ted Griggs and Crick Waters. They spent nine months researching how people used phones. They noted how people use a cellphone and VoIP services from their computer, but that these two services were in silos. Services Jajah and Skype are good at letting you make cheap VOIP calls, but they aren’t designed to be inserted in other applications. The Ribbit founders also noticed that each large company needs phone features to work in different applications, tailored to the company’s specific workflow needs, and that it cost at least $250,000 to build phone features to fit into their application set.

So Ribbit decided to make it very easy: Provide an API to let non-phone experts build phone features on their own, allowing them to put them on any Web page and tie them into any application. Former AT&T and Sprint product executives, they recruited some Web 2.0 engineers from Yahoo and eBay to help them. 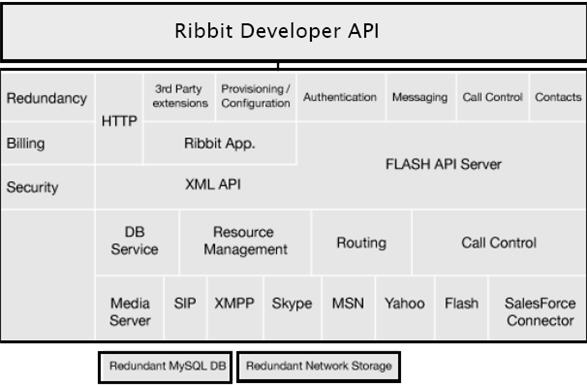 Griggs earlier founded a company called Junction, a VoIP software company that was merged with Summa Four, and which was sold to Cisco in the late 1990s. Ribbit’s core invention is something called a telephone “soft switch,” so called because it is a piece of software that can manage phone calls. Griggs built the basis of it at his most recent company, Syndeo. That company received $98 million in investment during the Internet boom years, but had struggled during the downturn and slow buildout of new networks in the U.S. It was a carrier grade phone switch, used in Japan for VoiP, but it was otherwise neglected. So Griggs acquired the intellectual property for the switch. It was built to work with any major protocol: SIP, PSTN, etc. Rejigged for Ribbit, this means it can call fixed line numbers, mobile phones, but also Skype, GoogleTalk, or MSN — all voice networks running proprietary protocols.

The Ribbit team added a flash interface, to handle calls from within any browser, so that it can work from almost any kind of data object, including jpegs and more. This lets you take messages, transcribe voice into text (using an application called Simulscribe), search it, add directory services, integrate it with Plaxo so you can manage your contacts, and more.

Ribbit recently raised $10 million in a second round of capital led by Allegis Capital, and joined by KPG Ventures participating. This follows $3 million raised from Alsop Louie Partners more than a year ago.

Ribbit charges developer a fee: $25 a month for the basic integration. Additional charges are made services such as voice mail, contact management and transcription services, call logs, provisioning and billing. Building applications is free, but once an application is being used for commercial purposes, Ribbit charges. It also charges the developer for the calls: $30 a month for up to 20 people using the service. The developer can charge their own clients as they want.Ribbit also lets developers sell applications to consumers from a Ribbit store. These apps are analogous to ringtones — except they are phone applications instead. For example, there’s Ribbit Earth, which shows a globe and colored lines connecting the places you are calling. Developers can charge consumers whatever they want. If the developer charges $2.99, he keeps 80 percent of that, and Ribbit takes 20 percent.

Here’s how it works for you, the consumer. You provide our phone number, and Ribbit looks up your carrier, and then gives you a simply set of instructions to forward your calls to the service. When you get an incoming call to your phone, you can do one of two things: You can answer it, and talk as normal. Or, if you ignore the call, it goes to Ribbit’s platform, and it can then go to any Ribbit enabled page you’ve chosen to place your Web phone. It can go to your Salesforce dashboard, for example, where you can manage incoming business calls, and see audio files or see them transcribed. Or you can have it go to your MySpace or other page (see screenshots here). 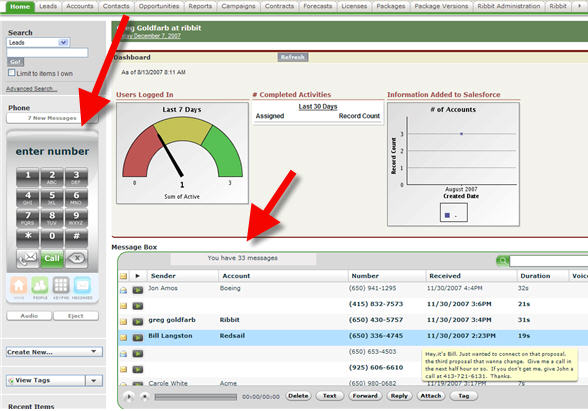 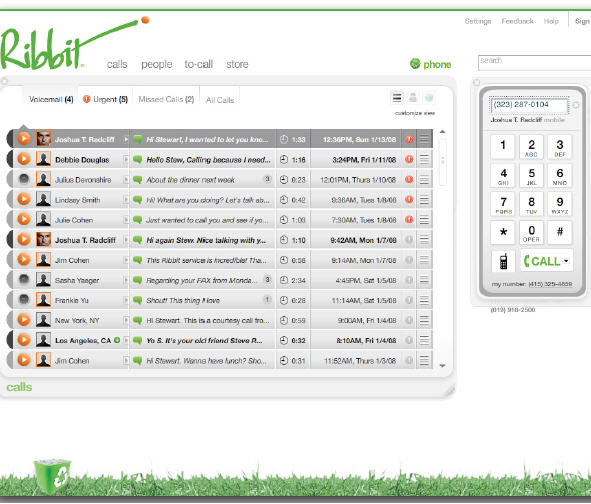 Ribbit also offers a social network features, too. When receiving a call from a friend, you can have Ribbit call up the feeds from that friend (your friend’s blog, LinkedIn account, Flickr, YouTube, etc) so that you can see what he or she has been up to lately, right when you’re talking with them.