Over a dozen tech companies hit the public markets this week, an unusually high number. And the latest to file for its IPO is cloud communications company RingCentral, which debuted on the New York Stock Exchange (NYSE) on Friday morning.

The company’s shares have continued to climb all day, with the company gaining over 42 percent. RingCentral pulled in $97.5 million at a valuation of $887 million. Shares opened at $17.51 Friday morning on the New York Stock Exchange and have moved as high as $19.40 in morning trades, settling down to $18.50 at the time of this report. 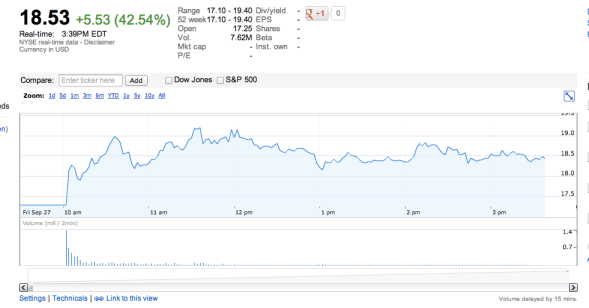 “There is a reason to be this excited — this is massive market disruption,” said Shmunis. “Business spend is shifting from on-premise to the cloud.”

Excitement from investors may be tempered if RingCentral does not reach profitibility. The company grew its revenues from $50.2 million in 2010 to $114.5 million in 2012. However, it revealed net losses of $7.3 million in 2010 increasing to $35.4 million in 2012. This is a similar story as both FireEye and RocketFuel, which are also in what Shmunis calls “investment mode.”

The good news is that RingCentral has grown to 300,000 customers, and the company has been around for over a decade. The company provides cloud computing-based phone systems, which are primarily targeted to small businesses.

Shmunis believes that RingCentral will continue to grow its customer-base, given that it provides IT with management capabilities for tablets and smartphone devices. Increasingly, employees are bringing their own mobile devices to work, a trend known as “BYOD.”

Ten years ago, when Shmunis started the company, he said that the technology was still a little early for the market. But he believes that now is the time for cloud-based communications; “business are ready for this change” he said.