Riot Games faces a lot more competition than it once did on the esports front, with new games such as Fortnite and PlayerUnknown’s Battlegrounds grabbing the attention of gamers. But the Los Angeles-based company believes that esports is still in its early stages, and it is moving forward in its quest to make League of Legends into a permanent esport.

The company has been operating the European League of Legends Championship Series (LCS) since 2013, and it has been investing more in the infrastructure of the league in recent months. That’s not easy, since Europe has a number of countries and languages to support and its audience is more easily splintered compared to other territories. It is also in the process of creating permanent teams in Europe, as it has done in the U.S.

I spoke with Marc Schnell, director of EU league management for Riot Games’ League of Legends operation in Europe. He said the company is ramping up both its staff and broadcast capabilities in Berlin, and it has aligned all of the incentives for its LCS teams so they are consistent with Riot Games’ own incentives for the long term.

“We’re restructuring the league, moving over to a long-term partnership model and away from the current promotion and relegation system,” Schnell said. “You might know that the North American LCS last year made a similar move.” 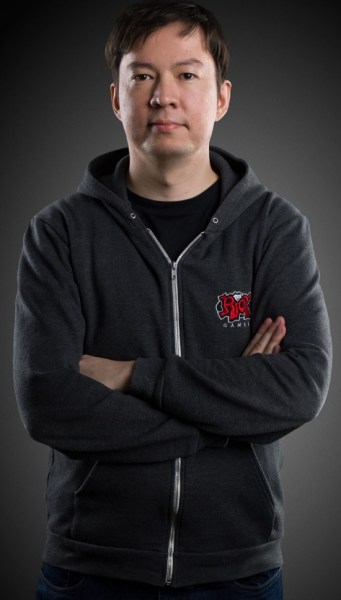 GamesBeat: Can you bring me up to speed on the background here? I understand you’re trying to do some things to improve the league overall. How long has this been going on?

Marc Schnell: We’ve been doing the European League of Legends championship series, the LCS, since 2013. We made the move to Berlin from Cologne back in 2014, and ever since we’ve been operating from here.

One big thing on the horizon would be that we’re restructuring the league, moving over to a long-term partnership model and away from the current promotion and relegation system. You might know that the North American LCS last year made a similar move. The application process is running right now. The other big thing is, we’re making improvements generally. We’ve seen over the last year how we can improve the viewing experience and do more on the tech side. We’re also improving our physical space here in Berlin.

GamesBeat: The goal seems to be to make League of Legends into a lasting sport.

Previously, in these past years, we were in catch-up mode. We’ve built up the team here now, staffed up in all areas. We went from a lot of temporary solutions for tech and physical space to committing to permanent installations. We’ve built a massive control room at the beginning of this year, the mothership for production, where the directors and producers sit amid all the tech and monitors. It’s been a big change for us on the production side. Having that permanently set up gives us a lot more opportunities and cool things we can do with the broadcast.

For example, we now have a bunch of roving cams that we can remotely control. We don’t need as manymanual operators. It gives the producers a lot more central control, while retaining that variety of camera shots. They can just control them via joystick. That’s just one thing.

We’ve also made significant improvements to what we call the world feed. The LCS is broadcast in many languages – I think we’re up to nine now. Previously, local broadcasters would just get our feed with the commentators removed and then they’d cast over that. Now we’ve switched to a more sophisticated solution where the local casters get their individual world feed. They have more creative freedom to design their own broadcast. They don’t necessarily have to do all the same things we do on the main feed. We want to go big on making those localized version of the LCS just as good as the English version. We’ve put much more investment behind them.

Beyond that, the Berlin studio has grown considerably over the past year. We’ve made significant quality of life improvements, ranging from having a nice cafeteria and backstage area for the pros and teams, a great entrance area with a cool Baron statue and a lot of League swag, League designs all over the place, to just making this a great place to work for all of our staff. It used to be a little bare-bones. Now it’s a much better place to work at for the staff and the teams.

GamesBeat: How many people work in that facility?

Schnell: The Riot office here has around 50 full-time employees. On show dates, though, we go up over 100 staff, if you include all the additional people we need for shows. The capacity of the venue as far as fans is about 180.

GamesBeat: Does it look more like a production studio, then? Something you’d see for a TV game show?

Schnell: Yes, very similar I’d say. There’s a big stage at the front, and then there are bleachers and seating for up to 180 people. 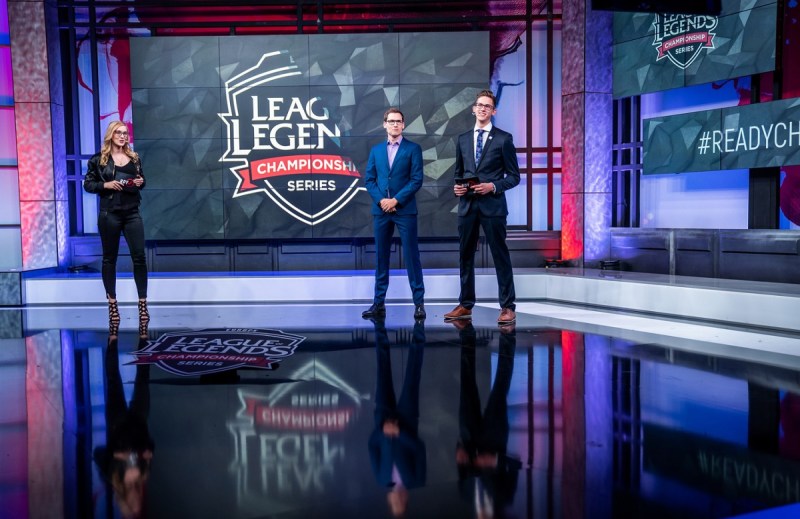 Above: Riot Games is investing heavily in broadcasts of its LCS tournament in Europe.

GamesBeat: How about for the league structure? What is changing? Are you mirroring what’s happening in North America, to give teams permanent berths?

Schnell: There’s definitely some similarity, but there are also differences. Currently we have 10 teams in the league, and they qualify to participate in the league through a secondary league below that. That’s the old system. We’re moving away from that to an entirely different model where we’re partnering with 10 teams. Those teams will be long-term partners with the league. The concept is that the league and the teams become business partners to build and improve on this product together. We’re collectively investing in the success of the product and sharing in the success of the product.

We’re trying to build something that’s interesting and entertaining for all of Europe, not just an English-speaking audience. When we select our 10 partners at the end of the process that’s ongoing right now, we’d ideally like to have a nice spread of times with different national affiliations, to ensure that we’re reaching an audience everywhere in Europe and have something that’s relatable, something that people can identify with no matter where they are in Europe.

Another core element of the European market is we have an extensive regional league system. Below the LCS, the top league, we have 13 national leagues, if you will, or regional leagues. We have a Spanish league, a U.K. league, a Benelux league, a Polish league. All of these leagues are thriving lower-tier leagues. On the one hand that’s a great player development platform. You often see players compete in those leagues and then get picked up by LCS teams. It’s a great place to nurture and find talent.

It’s also a great way to locally connect with fans. Not everyone always has the time or opportunity to come to Berlin to see the LCS, but with this extensive regional league system, we have a league that everyone in Europe can identify with, that’s dedicated to where they’re from. The best of these regional leagues also compete against each other in a tournament called the European Masters, which is the culmination of these semi-professional leagues.

Next year we’re basically going to have two ecosystems. On the one hand, there’s the EU LCS, the top tier of competition in Europe. It’s the place where, as a player, you want to end up if you want to advance your career. It’s an opportunity to test yourself against the best in Europe and have the opportunity to represent Europe at the world championships. At the same time, we have this extensive regional league ecosystem that can be a stepping stone toward a pro career. You can represent your country against the rest of Europe.

The regional league system we just revamped in 2018. In the summer, just a week ago, we announced that we’ve added another three regions to complete the whole map. We now have every region and country in Europe covered. 24 teams total will go to the European Masters, the best out of the 13 regions. It’s similar to the Champions League in soccer, where every country gets a certain number of slots depending on the size and maturity of their league. If you count all of the teams competing in all the regional leagues, I don’t even know. More than 100, at least.

GamesBeat: So the main difference is you’ve had to modify the structure to account for so many regions and languages?

Schnell: Yes, that’s the main difference with North America. Other than that, if you look at it from the outside, the EU LCS looks similar. We’ve also adopted the same league format. We’re playing a double round robin, best of one, leading into the playoffs. 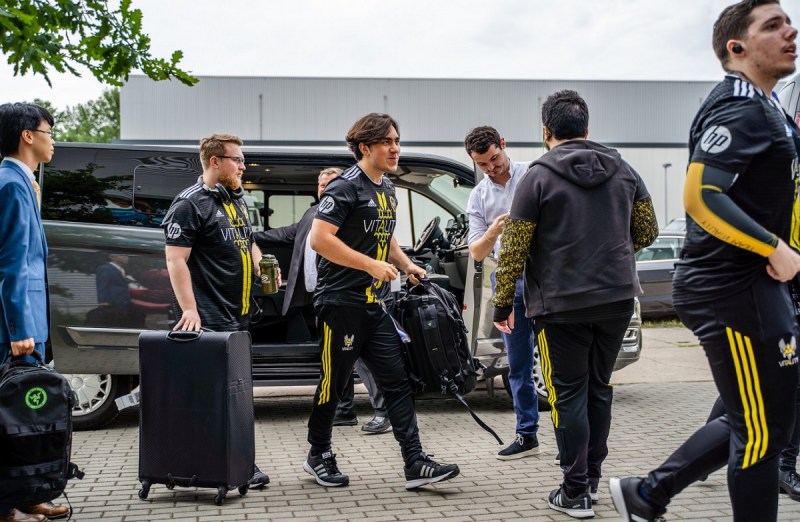 GamesBeat: Is there some balancing going on in terms of who’s the most competitive relative to the need to represent every region?

Schnell: Right. When we make our selections for our partners, obviously we’ll look at a whole list of things. What can they contribute to the league? Do they bring some special experience or expertise that would level up everyone, including the other teams? What brands are they going to use? What story are they telling? Do they have competitive experience in esports?

Another key factor will be, do they have national affiliation? Do they resonate with a particular group in Europe? We’ll look for a lineup of 10 that we feel synergizes the best and lets us capture the biggest portion of the audience that we’d like to entertain.

GamesBeat: I saw some stories in the past where some teams have complained that it’s hard to earn money in the old structure. Is that also one of your goals here, to make it more sustainable for the individual teams to invest in League of Legends?

Schnell: Definitely. On both the league and the team side—we’ve done League of Legends esports for a decade, but we need to make sure that teams can run their businesses sustainably. It’s true that in the previous system, where the league simply paid each team participating in the LCS a fixed amount, that amount was not influenced by how much the league made, by viewership, or anything like that. It was just a fixed amount that was agreed upon. The rest of the business was left up to the teams themselves.

That system wasn’t great, because it didn’t provide anyone an incentive to work together. Everyone was trying to make ends meet on their own. We believe that with this new structure we’re introducing, where everyone is naturally incentivized to create revenue and put it in this big pool that we’re all sharing—if I see another team making a great deal and doing well, I’m happy because I know that they’ll be sharing that revenue into the pool. Similarly, if the league is doing great deals, the teams will all be happy because everyone shares.

The core strength of this system is that it allows us to partner up collectively, do business together, and win together. Previously we didn’t have that natural incentive.