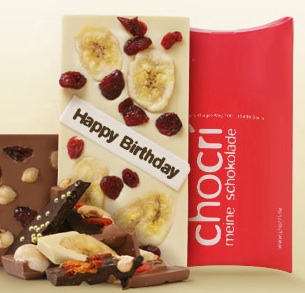 German startup Chocri has enlisted the backing of major chocolate manufacturer Ritter for its plans to deliver personalized chocolate bars. Carmen Magar, the company’s US chief executive, told me Ritter has invested in the low seven figures (i.e., single-digit millions of dollars) in exchange for a third of the company.

Chocri is part of a wave of companies using the Web to deliver more personalized products — the most famous examples are probably jewelry companies like Blue Nile. In this case, users can design their own chocolate bars, choosing from menus of chocolate types, fruits, nuts, etc. After you buy the bar it’s delivered in the mail. The site first launched in September 2008, expanded into the United States in January, and is available in the United Kingdom as of today.

Until now, Chocri was self-funded. The cash should help the company increase and automate its production, Magar said. It’s also a clear sign that traditional manufacturers are taking an interest in a more customized approach.

“While we make 50k bars a month, they make 75 million,” Magar said. “There’s so much we can learn from Ritter.”

In fact, she said that Ritter’s advice has already led to a 30 percent increase in Chocri’s productivity.