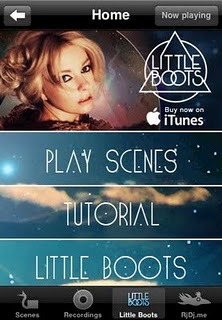 In an age when tracks can be copied or streamed at virtually no cost, what extras can musicians add to make a living?

A London- and New York-based startup called RjDj is experimenting with one answer. RjDj is taking albums from electronic artists like Little Boots and Air and creating reactive music experiences from them through iPhone apps. RjDj launched one this week with Little Boots, a British electropop artist who made her name by posting YouTube videos of herself playing experimental instruments like the Tenori-On.

What’s reactive music? It’s a type of music that’s different every single time you play it. The phone’s microphone picks up sounds from your environment while the accelerometer takes in the movement of your phone. RjDj’s app can incorporate both into the track, making each time you play a song entirely unique. The startup launched its own free app last year that offers an ever-changing variety of tracks and effects.

With the Little Boots collaboration, RjDj tooks three tracks from her already released album and turned them into a $2.99 app where you can apply effects to each song. One track focuses on accelerometer movement and sounds more agitated depending on how fast you’re walking or how much you’re shaking the phone. Another takes in sounds from your environment, like chatter from people around you in a cafe, and infuses them into the song. The effects range from being almost indetectable on some tracks to being completely transformative on others.

In the same way that sites like YouTube and social networks have handed people the tools to create experiences rather than passively consume them, RjDj is trying to allow music fans to influence the tracks they’re listening to. Fans can share unique instances of the generative Little Boots track and upload them to RJDJ’s site.

The company has also done its own take on headphone parties, where attendees listen to RjDj tracks while a person dubbed the “reality jockey” plays with different effects. 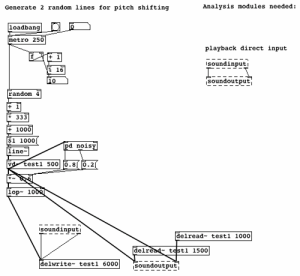 Although RjDj is working with well-known electronic artists to create apps, the company doesn’t see them as their only business model. RjDj is pioneering the use of PD (or PureData), a graphical programming language, and applying it to music composition to create reactive sound tracks. Composing music with PD looks like the rather intimidating flowchart to the right. RJDJ is working on software with a more consumer-friendly user interface that may be released next spring. (If you’re interested, here’s a tutorial on how to hack RjDj’s software with PD.)

At this point, RjDj caters to more of a niche community, but its thinking may contain several hints about the future direction of the music industry.