The rise of the on-demand economy means you can order a cab with your phone and have just about anything delivered quickly — as long as you live in a big city. To help the rest of the country get goods delivered same-day, startup Roadie has just raised $10 million.

The mobile app, which launches today on both iOS and Android, uses the vast number of daily commuters on the road to create a person-to-person shipping network. Opening the Roadie app reveals a map of people driving to and from various destinations, as well as delivery requests. 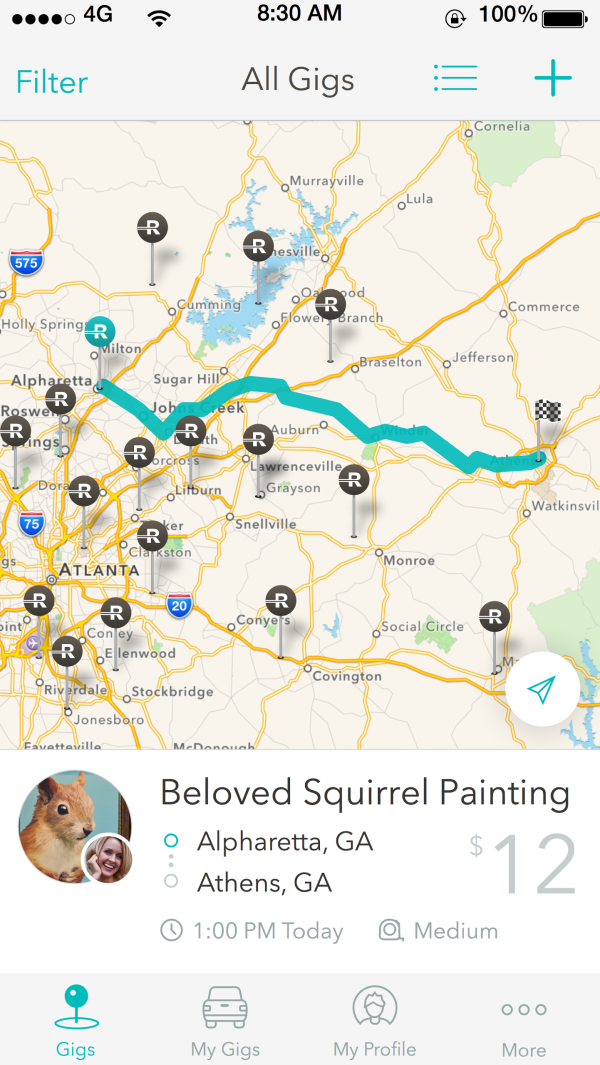 The name “roadie” is a reference to the roving troupe of technicians that travel with bands on tour. Roadie, the mobile app, uses a lot of band jargon. In the app, drivers, called “roadies,” select “gigs” for cash. A “gig” in this case consists of picking up an item from a place you’re already in and delivering it to a destination near wherever you’re headed.

Atlanta, Georgia-based founder Marc Gorlin, dreamed up the idea while sitting in traffic going from Montgomery, Alabama, to Birmingham. A contractor was supposed to deliver bathroom tiles to his condo for an emergency renovation he was doing, but the tiles got held up. He needed to go pick them up himself or else wait three days to have them delivered. As he was sitting in traffic, it occurred to him that there was probably someone in that traffic coming from Birmingham. If he had known who that person was, he could have reached out and asked them to deliver the tiles.

“Southern hospitality is something that is genuinely Southern,” said Gorlin. He said his company is very much based on the idea that neighbors should be inclined to help one another.

Roadie users pay a base fare plus an additional fee per mile traveled for deliveries. When the payment comes in, 80 percent gets paid out to the roadie and 20 percent goes back to the company. Roadies can pull in about $8 to $150 per job depending on how far they have to travel.

Gorlin said all drivers who sign up for Roadie must do a background check with the company. Still, people who list gigs can choose to meet the roadie in a public place, like a rest stop, if they’d prefer not to have the delivery come to their home. In addition to the background check, users can rate and recommend roadies.

Starting today, you can initiate a gig if you live in Florida, Tennessee, Mississippi, Arkansas, Alabama, Louisiana, Georgia, or the Carolinas. Gorlin said the fully functioning app will roll out more broadly across the U.S. later this year.

In the meantime, Roadie has a lot of work to do. Amazon, eBay, and even Google are already pushing same-day delivery services in major cities around the country. Even without counting those three major companies, there is still an abundance of delivery services being offered by startups, e-commerce retailers, and traditional shipping services.

However, Roadie could appeal to a large and underserved market — people in less densely populated areas of the country. Already the company is marketing itself as an alternative to expensive shipping. Gorlin said he envisions the app being used to move fragile antiques or anything you find on Craiglist.

At the very least, the company has support from UPS Strategic Enterprise, which participated in this round of funding. Other investors include Eric Schmidt’s TommorowVentures, Warren Stephens of Stephens Inc., and Square cofounder Jim McKelvey.