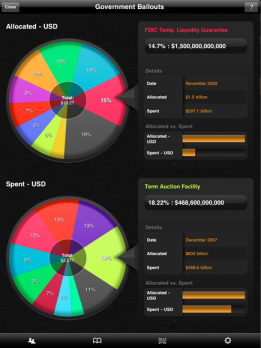 MeLLmo, Inc., a San Diego startup still running on bootstrap money, has released the latest revision of its iPhone app, Roambi ES3 — pronounced ROAM-bee — with support for 10 major corporate data sources including the newly upgraded Google Docs. Roambi, which I wrote about last year, is one of the few iPhone apps that goes beyond cutesy graphics to serious data visualization tools. The company rethought the graphical interface to, for example, an Excel spreadsheet when handled on an iPhone screen instead of a big desktop with a keyboard and mouse.

Roambi ES3 adds new features for the iPad’s much bigger screen. And the company has once again rethought its app’s pie charts, spreadsheet, list and other visualization widgets to make maximum use of the iPad’s bigger screen and faster processor. Mellmo’s designers could probably hold their own in an argument against statistician Edward Tufte. But VentureBeat editor Owen Thomas likes Roambi because, with a gesture or two, he can ditch the graphs and look at the actual numbers in a spreadsheet, color-coded for profit and loss, sales region, or other at-a-glance differentiators.

New visualization tools include what Mellmo calls Trends, useful for tracking key performance indicators, and Pods, which are custom dashboards built from multiple views onto multiple data sources. Roambi was impressive on an iPhone, but on an iPad it really opens up. (You can also use a Flash-based version on a desktop or laptop computer.) 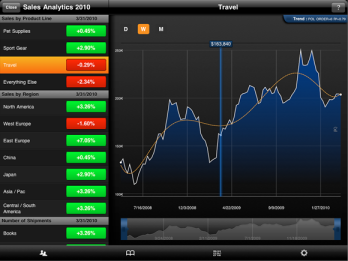 Mellmo says the new app can be connected to most popular corporate database systems: IBM Cognos, Microsoft Reporting Services, Microsoft Sharepoint, LifeRay, SAP Crystal Reports, SAP BusinessObjects, Salesforce CRM and Microsoft Excel. Mellmo co-founder Santiago Becerra gave me a demo that showed how a salesman in the field could work with what he’s sure is the latest copy of spreadsheets from the home office.

But just as important is the new support for Google Docs, the fast-growing free alternative to corporate IT systems that startups can’t afford. Roambi’s graphics are both slicker and more touchscreen-friendly than Google’s.

The Roambi visualizer app is free. There are two versions of Roambi service with different pricing. Roambi Pro connects to Google Docs and is available for $99 per user per year. Roambi ES3 is the enterprise version that connects to all the enterprise data sources. Pricing for ES3 starts at $795 per user with a minimum of 50 users. Both versions connect to Salesforce CRM, and both versions include the free Roambi Lite service that connects to Excel and CSV files.

If you’re a Google Docs user with an iPhone or iPad, the much better interface to your Google docs and spreadsheets might be worth paying for out of your pocket.