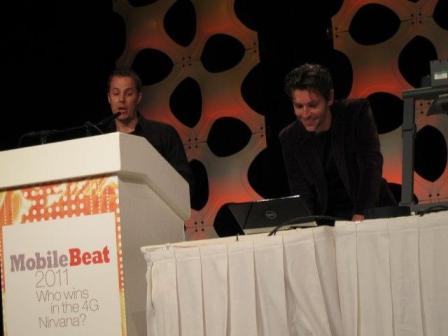 Roar Engine got up on stage today at MobileBeat 2011 and showed us how they could build a social game in four minutes.

The company did the demo during the MobileBeat Startup Competition, where they were competing in the infrastructure category.

“What if you could build Farmville in a week?” asked fast-talking cofounder Clint Walker. “Roar Engine offers a cross-platform, scalable, social game application layer that’s instantly available. We distill the core mechanics of social games into a highly configurable, easy to use system so that game developers can focus on the fun.”

The product targets all game designers, not just engineers, and encourages them to build social games on scalable technology without any upfront development.

“We’ve focused on solving the backend,” says Walker. “You can write your own API calls. You choose your front end and you can build as much as you want into that.”

Roar Engine is based in San Francisco and is Angel funded. The founders, Walker and Mike Anderson, call themselves “serial entrepreneurs with multiple exits under their belts.” Prior to Roar Engine, the two worked together on Rising Sun Research, an “Oscar winning startup” that was acquired in 2008.

The first major IP built on Roar Engine 1x is Discovery Channel’s “The Deadliest Catch,” a Facebook game. Roar worked with Hive Media to build the back end for the game, which will soon have 100 monthly active users.

A new version is currently in private beta.

Roar Engine is free for games until they reach 100 daily active users. After that, Roar charges for use of the platform. One thousand DAUs averages out to be $110 per month. There’s also a more traditional software licensing model of $125,000 per game (it includes one year of support and upgrades).