Roblox is revealing its top games of all time, and it says that each one of them has been played more than a billion times.

Roblox’s games are accessible in its virtual world, and they have reached a huge level of engagement with its mostly kid and teenage audience, with 100 million monthly active users in 200 countries. Those fans spend more than a billion hours in the Lego-like online gaming world per month.

And 50% of active users on Roblox play with their friends.

The rankings are as follows:

And here’s more description of the ten-biggest Roblox games of all times (as of November 2019):

Released in 2016 by a developer who goes by Alexnewtron, MeepCity was the first Roblox game to ever get more than 1 billion visits. In this experience, you can play with millions of other MeepCity visitors and chat, enjoy different games, earn coins, or customize your estate. To this day, Roblox says Alex still plays MeepCity because he believes it is super-important to understand the reasons people are into it. He even uses different accounts to get insights on first-time user experience and interact with everyone.

He said in a statement, “We have a small team, but together, we design ideas and content based on how people play MeepCity. For example, we saw how much players loved to roleplay in the pizza shack, so, we decided to add an ice cream parlor, and the community loved it.” 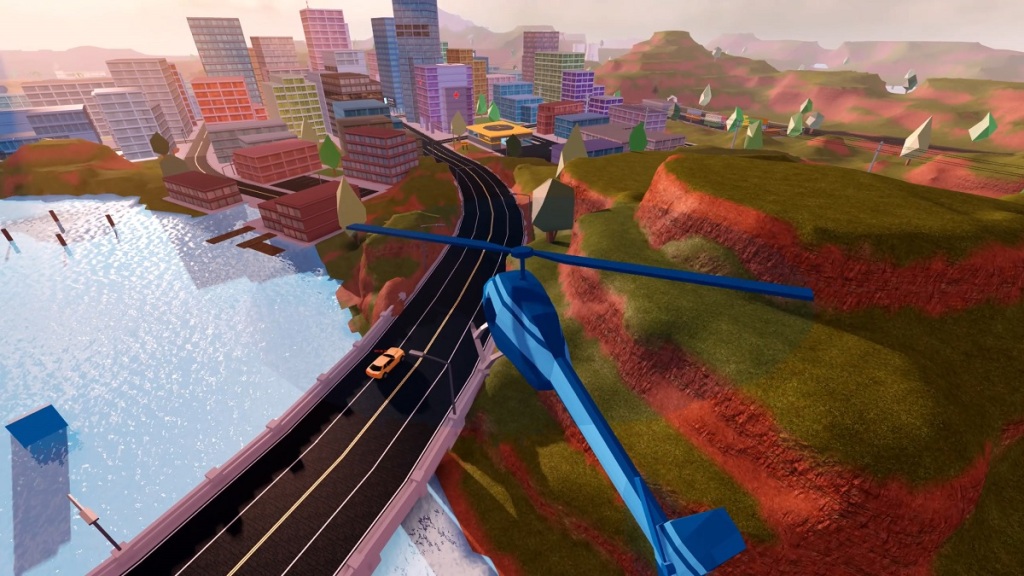 Above: Jailbreak has been played 3.1 billion times on Roblox.

Currently in its fourth season, Jailbreak was voted by Roblox community as the “Game I’ve spent the most hours playing” in the 2019 Bloxy Awards. In the game, you can orchestrate a robbery or stop the criminals before they get away, or team up with friends for even more fun and plan the ultimate raid or heist. Choosing the role of a criminal means your goal will be to escape from prison, or you could be a cop preventing the criminal’s escape.

Alex Balfanz, who created Jailbreak with one other developer (who wishes to remain anonymous), shared in a recent interview that after they released Jailbreak in early 2017 (working on it after school and in their spare time) it just “blew up” with “immediate and lasting popularity.” You can play Jailbreak online on Roblox, or extend your play to the physical world with Jailbreak toys and sets (developers who have their games referenced in Roblox toys share in the profits). 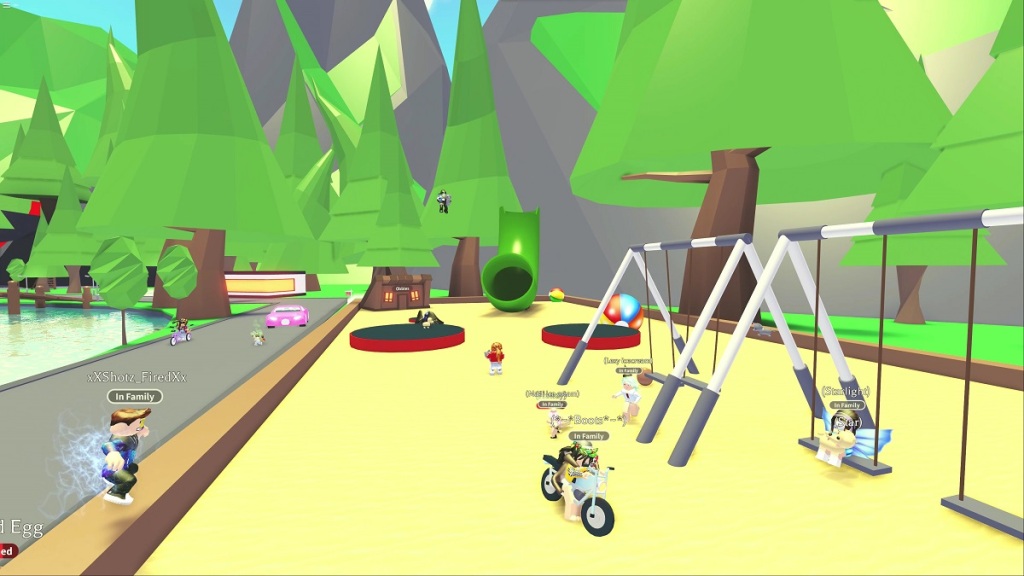 Above: Adopt Me! has had 3.0 billion plays on Roblox.

Earlier this year, Adopt Me! broke new ground, attracting hundreds of thousands of concurrent players (over 500,000 at one point, which is a record for any game on the Roblox platform) when the game was updated with a new feature release: adopting pets. Just about any time you check in on this, you’ll see over 100,000 users playing together: adopting pets, designing their own homes, exploring Adoption Island, and more.

The creators Bethink (creative director) and NewFissy (tech director) have been playing on Roblox for many years, but a few years ago, they started experimenting with game development. Adopt Me! was a fast success (they made it in 2017), and the creators believe that encouraging adoption in the virtual world can have an impact on the real world. New pets to adopt come with every new release, including turkeys in the Thanksgiving update and bees. 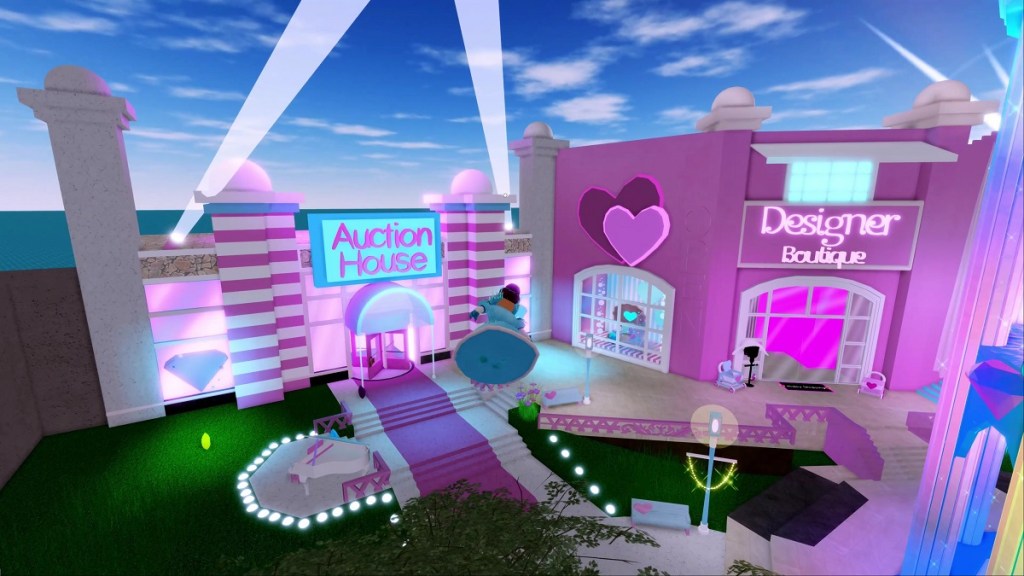 Above: Royale High has been played 2.4 billion times.

Remember your high school prom? If you’d love an opportunity to dress up every day and show off your new amazing garments to friends, you’ll feel at home in Royale High. You can join tens of thousands of people playing at any given moment, find new friends and places to explore with new content added on an ongoing basis.

Callmehbob, the creator of this popular experience, is a celebrity on the platform, with what Roblox says is half-a-million followers and friends. A “girlie girl” who loves everything pink (as she describes herself), Callmehbob started playing when she was about 12 and was stoked to see the introduction of female body shapes for avatars on the platform a few years later.

She then decided to learn Roblox Studio in order to create a beautiful environment where she could dress up and role-play. Once Royale High became available 2017, it took just a few weeks for hundreds of people to discover it and start playing. Then thousands and, eventually, millions. Now a community of dedicated fans are creating beautiful items for the world of Royale High, and in the future, the creator thinks people could be creating their own businesses like their own clothing shops within this world, make their own currency, and so much more.

“We haven’t even tapped into any of that yet,” said Callmehbob, in a statement, saying she and her team see themselves working on Royale High for many more years to come. 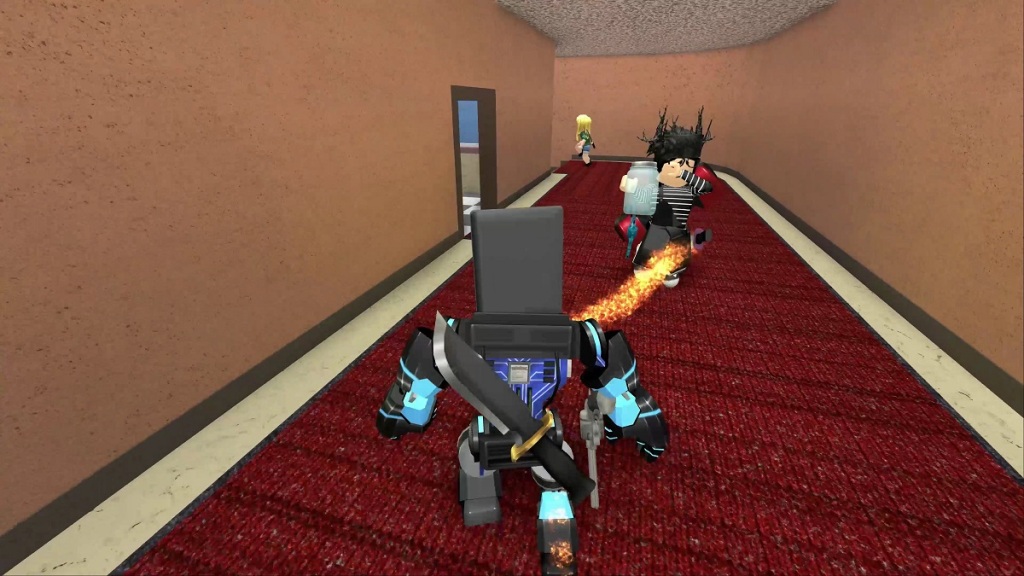 Above: Murder Mystery 2 has been played 2 billion times.

Can you solve the mystery and survive each round? Nikilis, who came up with this intriguing experience (first released on Roblox in 2014, but with multiple updates since), proved that you don’t have to build massive (in feature scope and architecture) games to garner millions of plays. At the beginning of each round you are assigned a role: Innocents run and hide from the murderer, but also use their detective skills to expose the Murderer; the Sheriff works with the Innocents as only they can take down the murderer; the murderer is just trying to eliminate everyone and not get shot by the sheriff.

Prior to Murder Mystery, Nikilis had some games on the platform and some fan groups too, but he didn’t expect the experience to become so successful. He recalled in a statement, “I was testing the gameplay mechanics with a few friends, but they actually weren’t that interested. So I sat in a server by myself, and posted the link on some of my group walls. I finally got one server full and decided to go to bed. When I woke up, there were thousands of people playing the game.”

Work at a Pizza Place 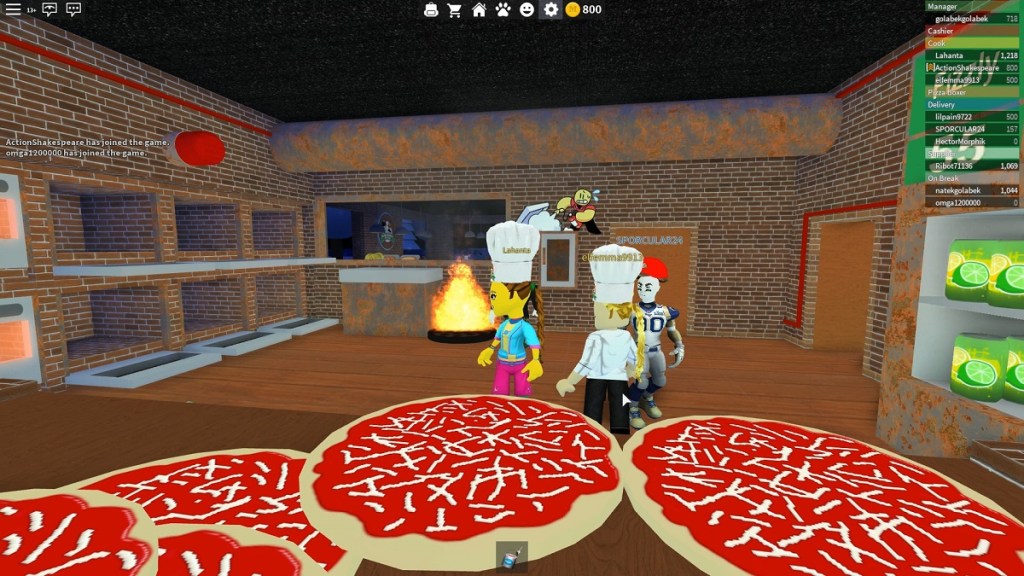 Above: Work at a Pizza Place has been played 1.9 billion times.

Who knew working at a pizza place could be so much fun? This roleplaying game is one of the most longstanding on the platform (launched in 2008), and other successful Roblox creators like Callmehbob say it was among top favorites before they came up with her own ideas. This game allows Roblox users to learn how to manage a pizza shop. You get pizza orders to fulfill, and the money you make can be used on various upgrades. The longer you play, the larger your house becomes, and you can populate it with more and more aesthetic additions like furniture, new floors, etc. As one of the employees (you choose if you’d like to be a cashier, pizza chef, delivery person, pizza boxer, or supplier) you get detailed job instructions for you job (you can also switch your role at any time).

Developer Dued1 explained in a statement, “The idea for the game came to me when I was working as a grocery store bagger. Being a bag boy showed me the concept of an assembly line—someone would put the food on the shelf, then someone would scan the food, then the bagger gets the food in a bag. I wanted to recreate that in a game.”

He thinks the key to the game’s success is an opportunity to socialize with friends and visitors while working together towards a common goal — who doesn’t love some camaraderie? 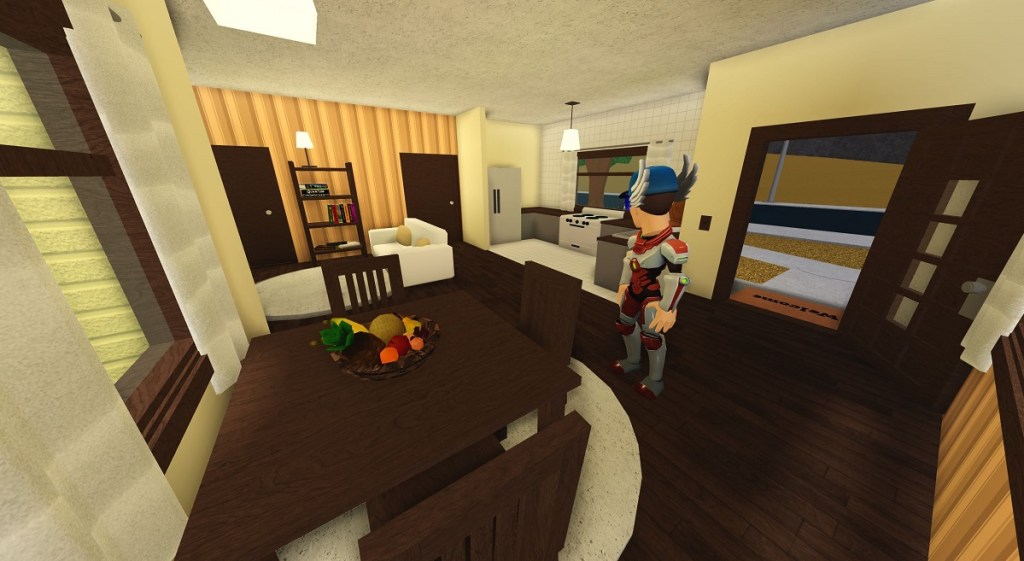 Above: Welcome to Bloxburg has been played 1.4 billion times.

Created in 2014 by Coeptus (currently a university student who prefers to keep his real name private and works on the game in his spare time), Welcome to Bloxburg is a virtual world where you live and work choosing among several types of jobs available for you. Using your earnings, you can build and design a house, own cool vehicles, hang out with friends, roleplay, or explore the city of Bloxburg.

Coeptus explained in interviews that he had no actual development experience prior to finding out about Roblox, but had quite a large interest in computers and video games. Once he created and launched Welcome to Bloxburg, the number of players grew very quickly: from about 20 plays in the first days to thousands a few weeks later. Eventually, players started sharing their fun experience on social media and uploading videos of themselves playing on YouTube, and the game has been a success ever since. Five years in, Coeptus’s focus is entirely on Welcome to Bloxburg — improving the experience, working on updates, and keeping in touch with the player community. 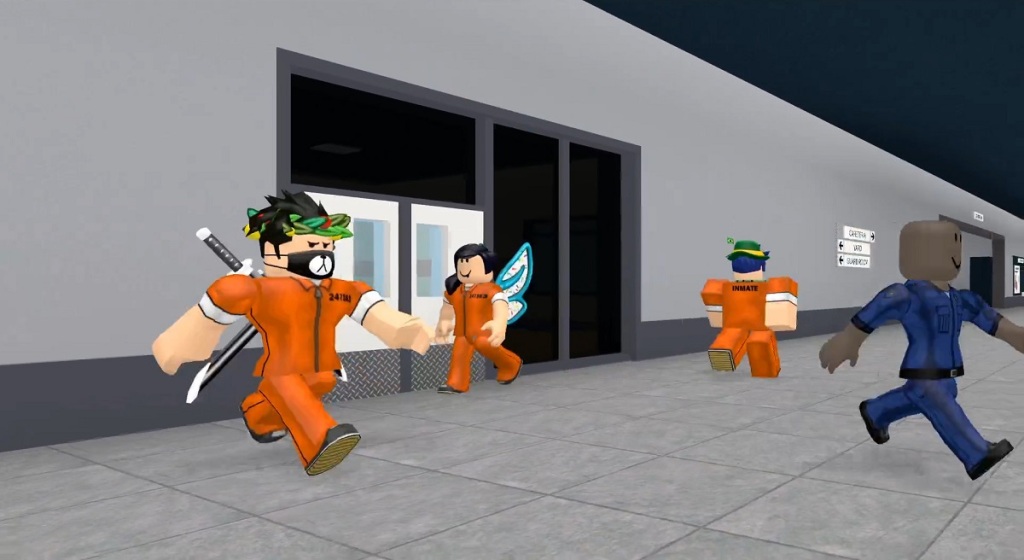 Above: Prison Life has been played 1.2 billion times.

Created in 2014 Prison Life is another hit game with a prison theme that gained thousands of dedicated fans. The game won a Bloxy Award in 2016 for having the most mobile visitors and concurrents (at the time). The developer known as Aesthetical started his first year of college in 2017, which means for a while he didn’t have much time to spend working on the game. However, more recently, he announced a renewed focus on the game, which Roblox expects will result in exciting new updates in the months ahead.

Above: Flee the Facility has been played 1.1 billion times.

This thriller first appeared on Roblox in 2017, quickly spiking the interest of Roblox players trying to escape The Beast. Your goal here is to hide or run away from the beast, and the run is intense! One player is a killer hunting down survivors, and other players are survivors who are running for their lives, having to collaborate in order to unlock the exits. The game’s creator MrWindy is a university student who really loves making games. The game has hundreds of thousands of fans. 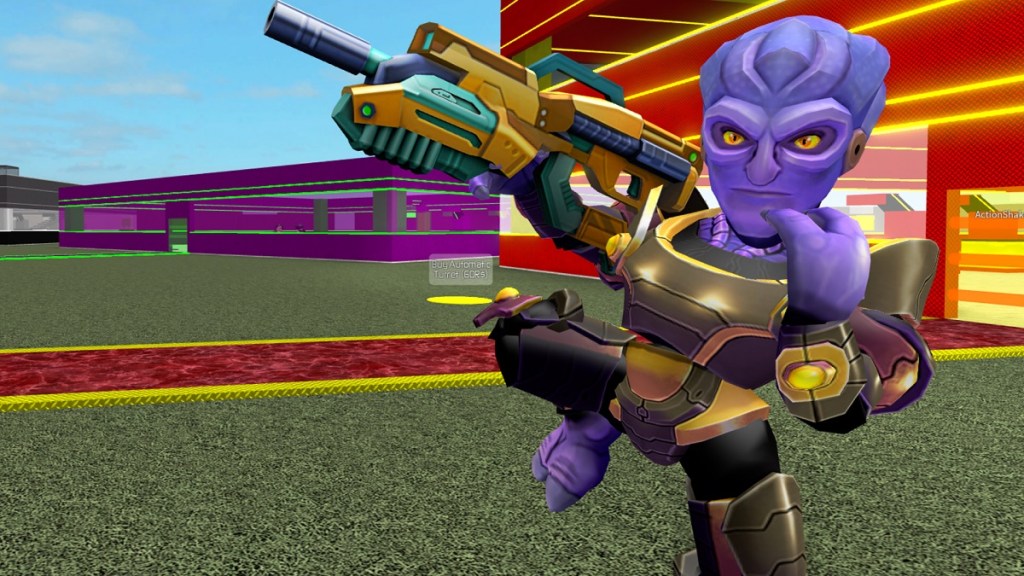 Above: Super Hero Tycoon has been played a billion times.

Who doesn’t want to be a superhero sometimes? Wait no more and try a cape on in Super Hero Tycoon where you can become one of the superheroes and build up your base to unspeakable size. Developer Hiddo, who created this game in 2016, is from the Netherlands and has a popular YouTube channel with almost 200K subscribers. His YouTube channel features only one video: Super Hero Tycoon game trailer, which has racked up over 1M views, underscoring how popular his game has become and how engaged the Roblox community is around him.