Car soccer is a sport, and nothing you can do will stop that now. 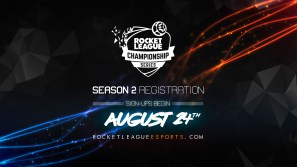 Above: Promo for RLCS season 2.

Rocket League’s highest competitive tier is getting a second season. The Rocket League Championship Series returns with registration opening today for teams looking to partake in the three-month season that will have a total prize pool worth more than $250,000. Developer Psyonix is inviting new teams to test their skills against the best in the world like returning champions iBuyPower Cosmic. The studio is hoping to keep its core audience engaged by offering up regular competitions in an esports space that is worth $892 million and growing.

Psyonix will broadcast RLCS matches to Twitch. The first season attracted 2.3 million viewers, and the studio aims to build on that number going forward.

“RLCS Season 2 is going to be awesome,” Psyonix president Jeremy Dunham said in a canned statement. “We learned a lot from Season 1 and so did our players, and we can’t wait to apply that knowledge to the next competition.”

Those lessons will manifest as a new format for season 2. This starts with an open qualifier in September and continues into league play later that month. A $10,000 Mid-Season Classic will mark the halfway point, and then league play will continue through October before the regional playoffs and championships kick off in November. Finally, the top four teams from Europe and North America will come together for the $125,000 RLCS Grand Finals.

“Our newer, more simplified format and bigger prize pools are a reflection of what our viewers, pros, and community have been asking for,” said Dunham. “And we’re incredibly proud to give it to them.”