Rocket League is coming to the Nintendo Switch later this year, and I played it at the Electronic Entertainment Expo game industry event in Los Angeles. I already wrote about how developer Psyonix is frustrated with Sony about blocking cross-platform multiplayer between the consoles, but I also got to talk to the studio about making the Switch game as well as releasing Rocket League in China and more.

Psyonix is currently in the process of optimizing Rocket League for the Switch. When I got to play it with a Pro Controller on the television, I found that it was the same vehicular soccer game I know well from the PC, PlayStation 4, and Xbox One (yes, I own it for all three platforms). Rocket League will hit Nintendo’s hybrid home/handheld Switch later this year, and Psyonix publishing boss Jeremy Dunham said that the team is targeting 720p and 60 frames per second both on TV and the system’s dedicated screen. That means no 1080p, but the company decided that wasn’t as important to ensuring the authentic Rocket League experience on Switch.

“Our whole goal for Rocket League on Switch was that we wanted it to look and feel exactly like Rocket League on other platforms,” Dunham told GamesBeat. “We didn’t want to make any compromises.”

Getting old tech working on the new Switch

One of the major challenges with the port is that Rocket League runs on Unreal Engine 3. Nintendo worked with Epic to build support for Unreal 4 into the Switch, but the earlier version of that game-development tool doesn’t work quite as well.

That custom work didn’t involve porting Rocket League to Switch. Psyonix’s game first debuted in 2015 before Unreal 4 was everywhere, and it would require a lot of labor to bring the game into that new framework. Instead, it’s the same game on Switch as it always was on the other systems, and the studio once again brought in co-developer Panic Button to do this port after it successfully brought the game to Xbox One.

But while Dunham mentioned the team didn’t want to make sacrifices with the Switch version, he acknowledged that these weren’t unavoidable.

Rocket League will also support two-player splitscreen in all modes. It can also do four-player splitscreen when docked and connected to a TV. For the former, the game will run at 60 fps, but it will drop down to 30 fps in the latter mode. That’s similar to Mario Kart.

But overall, Dunham explained that optimization was zooming along and that the game was running better than they expected at this point.

“We’re actually ahead of where we thought we’d be,” he said. “We didn’t think we would have it running this smooth, this early. For a while we were concerned about whether we’d have anything to show at E3 at all. We have a very talented team at Psyonix. Our engineers have done a lot of hard work to make sure this runs as well as it does already. We’ve already discovered things in the last few weeks that we weren’t aware of a few weeks ago. It’s already made the game perform incredibly. We’re very encouraged.”

Dunham expects that even Rocket League pros will love the Switch version and having the option to play it anywhere without needing a gaming laptop.

Rocket League was the surprise hit of summer 2015. And while it was popular in part because it was available at no extra cost through Sony’s PlayStation Plus program, the PC version is now one of the most-played games on the Steam platform. One of the reasons Dunham gave for that growth is that the studio is treating it as a living, ongoing service.

“A lot of developers will release a title, support it for while, and move on to the next project,” he said. “For us, Rocket League is an ongoing, infinitely-updated product for as long as we can see. Now that we’ve proven that over time, people realize we mean it, and they’ll stick around longer. They don’t have to hurry up and play it and get it over with. It’ll still be there for them if they go do something else and then come back.”

But Psyonix didn’t launch Rocket League with constant ongoing updates and a massive number of simultaneous players in mind.

“No way. That was rough,” said Dunham. “We never thought that the number of players who came in would come in. To give you some idea, there’s 32 million players lifetime in Rocket League. Between six and seven million players a month come in to play it. Those numbers are going up. They haven’t dropped yet. We have more people coming back than regularly playing. Three million games played every single day. That’s obviously higher now than when we launched. When we launched, we had no idea it would be as popular as it was.” 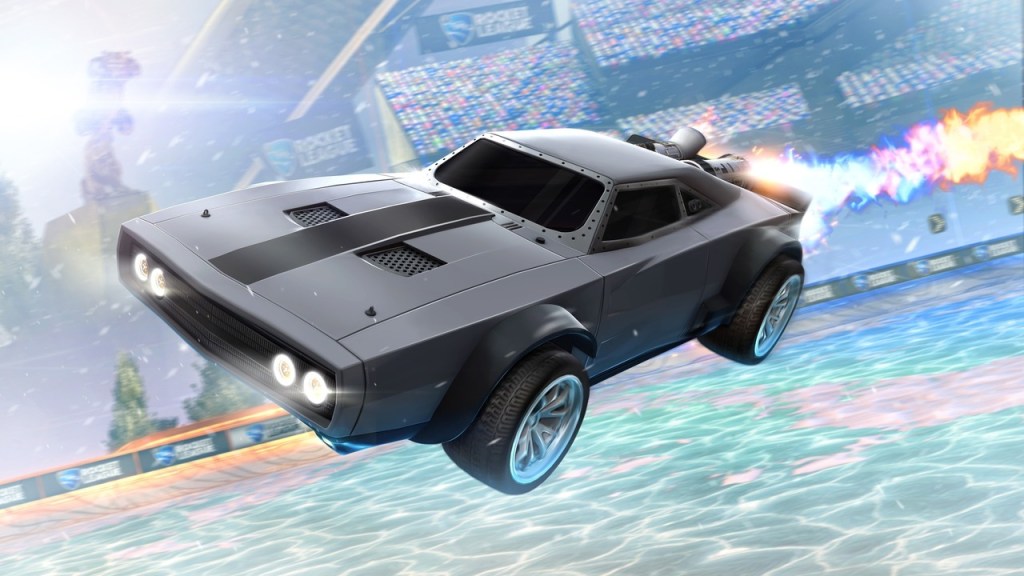 Above: The Charger from “The Fate of the Furious” in Rocket League.

Psyonix actually had to actually rip the old network code out of Rocket League because it wasn’t powerful enough to handle the audience.

“Our multiplayer at the time was only built to support a very specific size of players,” said Dunham. “We were forced to rewrite our entire network code on the fly in that first week of launch and deploy it. Our entire online services team was the same team that was part of the client team, which was part of our production team. It was a full company effort to get that done. And in the time since then we’ve built up an entire online services team that didn’t exist at all.”

At this point, the live operations team is still growing. That’s because the game is still adding new online components as well as the expansion to the Switch and into new markets like China.

“It requires a lot of attention,” said Dunham.

Rocket League is popular all over the world, and now it is making its move into China. Psyonix is working with Tencent to break into that crucial market, but the game is also changing as well. Unlike in the U.S., Rocket League is going free-to-play on Tencent’s PC gaming network.

“That’s why there’s not a release date or additional details about the Chinese version yet,” said Dunham. “We’re retooling the game for free-to-play, and we don’t want to give out a date before we know it’ll be ready.”

But like with most of Tencent’s publishing deals, Psyonix is working closely with that corporate giant (which also owns League of Legends developer Riot).

“We speak with Tencent constantly,” said Dunham. “They have a lot of really good insight. Obviously we don’t understand that market like we understand our own, but they do. They have a massive presence over there. They’ve been really helpful in letting us know what works and what doesn’t work based on their audiences. I’m seeing them next week, and I’ll be dropping by quite often.”

Going into China, even with Tencent, is still risky for many developers. Studios often have to give up a majority of their revenue to other platforms and publishers because the laws and distribution models are oppressive for foreign companies — especially when it comes to mobile. But Dunham didn’t seem concerned.

“I can’t discuss the specific split, but it’s a very good deal,” he said. “We’re happy with it. They’re the official publisher, and we’re the developer.”

And that relationship works for Psyonix because, in the end, it still controls Rocket League in China.

“It’s not going to be pay to win, for example,” Dunham said, referring to a popular model in Chinese free-to-play games where players can buy advantages over other players. “That’s covered. We’re directly involved in development. We’re not just handing it off to someone. To us, that’s the best way to handle it. It’s basically what we’re doing now, except we have their expertise in a market where we don’t have any knowledge. From our perspective, so far so good. We’ll really know once it’s out.”