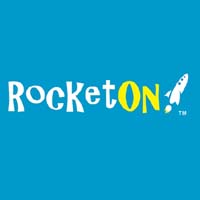 RocketOn and Animax Entertainment are announcing today a partnership that will make it easy for groups of friends to visit web sites together — and then scribble all over them.

RocketOn’s technology allows you to create virtual characters, or avatars, that can walk and scrawl all over sites on the real web. In essence, RocketOn turns the whole web into a backdrop for a virtual environment.

The partnership with Animax, a creative agency, is significant since it promises high-quality animations and the likely involvement of Animax’s big-name clients. That’s what RocketOn needs to make the concept really take off.

Like somebody with X-ray vision in a sci-fi movie, you can only see this “parallel” virtual world layered upon ordinary web sites if you have your own character. The company does this by putting a layer of interactive Flash technology on top of web sites. You can download a browser plug-in and you’re up and running on any site. Or, if you don’t want to download a plug-in, you can visit the RocketOn site and log in there first. Then you can visit any parallel virtual world site through what RocketOn calls its “teleporter.” 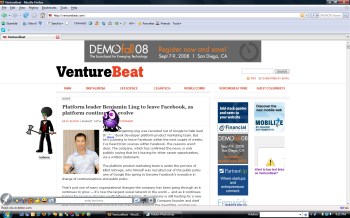 By using the RocketOn technology, groups of friends can visit sites together and talk about them using live chat services. They can go on treasure hunts linking various sites and jump automatically from one page to another by entering a virtual door, or “worm hole,” left behind by others.

It combines the animated avatars with the real web and allows you to scribble all over the real web sites using a kind of virtual graffiti. Eric Hayashi, co-founder of the South San Francisco-based company, showed how his character could walk all over the VentureBeat web site and mark it up (see the purple avatar in image). Other avatars can join the party and (virtually) deface the web sites together. The physical changes you make, like drawing a red X through a site, aren’t made to the real web sites, only the sites as they are depicted inside the parallel virtual world.

In the partnership, Animax Entertainment will help RocketOn create parallel virtual worlds using its expertise in created animated content for major brands, media networks and movie companies. Animax and its clients (which include companies such as Disney, ABC, and Ford) will use RocketOn’s Parallel Virtual World Platform and authoring system. RocketOn will manage the entire platform.

Other developers will be able to add their own parallel virtual world layers on their own sites, using RocketOn’s tools. Among the applications possible are games, such as a faux Black Flag site that RocketOn created as a demo. You can visit the site and try to catch a bunch of roaches with a Roach Motel.  You can also create games where the object is to take over someone else’s web site or a series of web sites. If a company creates an application that generates revenues, RocketOn gets a cut.

How will RocketOn make money? You can dress up your avatar and buy extra things with points, said Steve Hoffman, chief executive of RocketOn. You can earn points either by buying them with real money or visiting sites. The latter is why the brands are expected to get involved. Companies can actually run marketing campaigns where they promote people to visit their sites with RocketOn avatars.

The company is in the midst of a private beta test now and recently launched the ability to create quests for groups of friends as well as animated monsters. If thousands of users visit the same web page at the same time, RocketOn creates another overlay room with a limited number of users.

RocketOn got seed funding of $800,000 a year ago and announced a $5 million round in February from D.E. Shaw Group. It has 12 employees. I’m waiting to see how this turns out. I can see how teens might find it cool to meet their friends and chat about sites while on those very sites. But I also think this technology could be used to create fascinating illusions, given the right design of avatars and clever web sites as the backdrop. That could be more broadly appealing.