Digital health incubator Rock Health released data today that shows an increase in funding for med-tech startups in the first quarter of 2013.

Thirty-seven health deals were valued at a total of $365 million, which is 35 percent higher than the first quarter of 2012, “suggesting that 2013 will be another record year for the digital health industry,” the blog post reads.

Rock Health cofounder Halle Tecco said the uptick in venture investment was matched by several acquisitions, including UnitedHealth Group’s buy-up of Humedica (a deal that was reportedly valued in the hundreds of millions). “The players seem to be especially heating up their M&A engines,” she said. 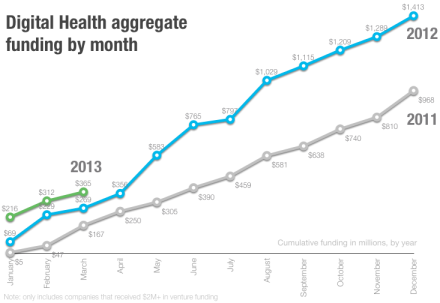 According to Rock Health, the largest and most notable deals of the quarter include:

What’s coming up in 2013? Tecco predicts a booming demand for wearable devices from companies like Jawbone, Misfit Wearables, MC10, and Basis. She said Fitbit has been shopping for a $30 million round, which was leaked to the press, but to her knowledge, the deal has not yet closed.

Remote patient monitoring is another rapidly-growing digital health market, which increased to $10.6 billion last year, according to a report by Kalorama Information. Rock Health points to a handful of startups that received funding this quarter, including Bam Labs, a sleep monitoring device placed under a mattress to detect movement and heart rate, and Independa, an independent living solution for the elderly.

Other areas to watch include personalized health and cloud-based electronic health records. On the other hand, bio-tech and medical device entrepreneurs are struggling to gain investment due to complex regulatory issues. Read more on Rock Health’s research here.