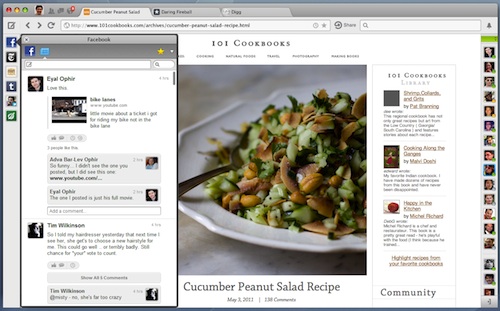 In the months before its launch, Mountain View, Calif. startup RockMelt was sometimes called the “Facebook browser.” That phrase still isn’t literally true, but it’s getting closer now that the company is releasing a version that was developed in partnership with Facebook.

Co-founders Eric Vishria and Tim Howes told me that they consulted with Facebook team members while working on their latest release. And while RockMelt already included a number of Facebook-related features, like the ability to chat with Facebook friends directly in the browser, the founders said the social networking company is now allowing them to integrate much more closely — thanks to Facebook’s cooperation, Vishria said this version includes a number of features “that we couldn’t accomplish in the past.”

Today’s changes fall into three main categories. First, there’s an improved interface for Facebook Chat, allowing people to bring up a full list of their Facebook friends and stick it on either side of the browser. Second, you can now manage your Facebook friend requests and respond to Facebook messages directly from RockMelt without visiting the Facebook site itself — Vishria and Howes said this has been one of the most-requested features from RockMelt fans.

I was most impressed with the third set of changes, which create a more seamless experience when you visit the Facebook website while using RockMelt. Since there are already boxes for friend requests, messages, and notifications in RockMelt, those elements disappear from Facebook. And when you start a chat with someone on Facebook.com, it will immediately open as a RockMelt chat window.

According to Vishria, there are more features coming — although he declined to get specific, because he said, “Honestly,” I’m not sure yet.”

RockMelt has raised $10 million from Andreessen Horowitz and others.