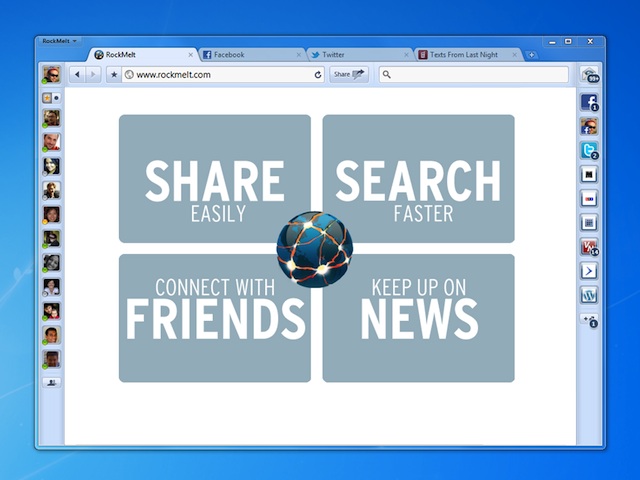 There’s been a flood of news coverage in the past day of RockMelt, a new Web browser that’s just opening to the public (in the sense that you can now request an invite). The response isn’t surprising, since the founders have big ambitions and have been validated with funding from Marc Andreessen, the co-founder of Netscape.

But there’s been some backlash too, in part because some of RockMelt’s promises sound awfully familiar.

When I met with co-founders Eric Vishria (chief executive) and Tim Howes (chief technology officer) last week, they argued that Web browsers haven’t evolved to match the way we use them now — older browsers are still designed as if the core Web experience involves navigating from website to website, rather than interacting with friends.

It’s a compelling argument, but it sounds rather similar to social browser Flock. There are also similarities to browser plug-ins like Mozilla’s Ubiquity and Vysr’s RoamAbout, which aren’t full-scale browsers, but also allowed users to access their social connections and Web services wherever they were on the Web. None of these products seems like a huge success — Flock has its fans, but it hasn’t exactly shaken up the browser market; Mozilla stopped work on Ubiquity; and the RoamAbout website hasn’t been updated since 2009.

Can RockMelt succeed where these other companies have failed? Andreessen apparently thinks so — his firm Andreessen Horowitz led the company’s recent funding. (RockMelt has raised $9.9 million total.) And I was very impressed by what I saw last week.

And on the top, there’s a box with an improved search experience. Normally, when I search for something, I’ll open three or four tabs with different results, because I’m not sure which one has what I’m looking for. RockMelt opens a column of results, and as you scroll down, the relevant webpage will open in the background. All of the pages are pre-rendered, so you should be able to scroll seamlessly, without waiting for each one to load.

RockMelt is built on top of Chromium, the open source project behind Google’s Chrome browser.

Of course, things usually work better in the company demo, so I tried to play with RockMelt on my own computer. Unfortunately, it seems to be stalling right now, so I have nothing to report but annoyance. Judging from remarks on Twitter, it’s working on other computers, or at least it was earlier. [Update: After quitting and restarting the browser several more times, it finally started working properly. Vishria said the company is “seeing this issue sporadically as we add new users.”]

One thing that will turn off at least a few users is the extent of RockMelt’s integration with Facebook. Not only does the browser allow you to log into your Facebook account, it actually requires you to do so before you can do anything else. Vishria and Howes emphasized that, as a startup, they had to focus their initial efforts on the biggest players, and that there’s nothing in the architecture that would prevent them from adding other services later on. So non-Facebook users are out of luck for now. But the use of Facebook as the default log-in on the Web and on phones is spreading, so I don’t think this will be a huge hurdle.

The bigger question is whether users are really looking for this kind of social browser, or if Silicon Valley types are trying to fix a problem that doesn’t exist.

Personally, I expect to make RockMelt my default Web browser (once I get it working), because I spend a lot of time monitoring social networking and news sites as part of my job. Being able to receive immediate alerts (that I can ignore if I’m busy with something else) rather than reloading Web pages would make me more efficient. But I’m curious if other users feel the same way — or if they’ll see RockMelt’s features as a huge distraction.