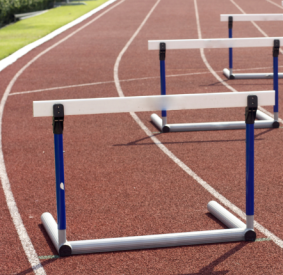 Facebook is a fantastic company that will be sold at a fantastic premium. That’s my key takeaway from the company’s filing of its S-1. The document, the first major public step in the process to an IPO, gives us a real look at the company’s numbers and insight into the minds of its management.

I love what I see. As terrible an offering as I thought Groupon was, Facebook is the polar opposite. There are real profits. Billions of dollars in cash and investments. Disciplined spending. Unheard of user engagement. Incredible efficiency per employee.

I also love what I don’t see. I don’t see more than a dozen class-action lawsuits. I don’t see any accounting gimmicks or dubious metrics. When you’re making $1 billion in profit on $3.7 billion in revenue, you don’t have to Make Stuff Up.

I often joke that I would love to see some company put into its S-1 that its potential consumer opportunity is 7 billion users. Facebook could have done that without it seeming ridiculous.

Still, Facebook isn’t without its challenges. Let’s take a look at them.

Market saturation in the United States

Facebook, according to its S-1, reaches 161 million users in the United Sates each month. That is incredible scale. The fact that those users are nearly all logged in makes it even more impressive.

There’s a downside to being as successful as Facebook has been in the United States: There’s not a lot of room for user growth. For comparison, I pulled comScore numbers from the time of Google’s IPO in August 2004. Facebook already has 100 million more users than Google did at the time. Back then, Google directly reached less than 40% of the U.S. Internet population. Facebook already reaches 73.7%.

Across all of Google’s much more diverse properties (including Gmail and YouTube), Google reaches 84.9% of U.S. Internet users. That doesn’t leave a lot of headroom for Facebook.

Facebook’s U.S. revenue growth will largely have to come from getting users to stick around even longer than they already do, launching new products and getting a bigger share of advertiser dollars. Population growth can only take it so far. 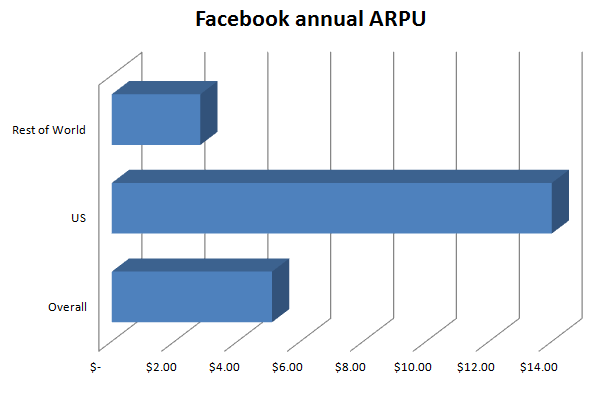 Most of Facebook’s user growth will come from overseas. The company is already doing a tremendous job at that. Year-over-year user growth in Brazil was 268%. In India, it was 132%. (Compared with 16% in the United States.) I lived in Malaysia for part of 2009 and 2010, when Facebook was finally getting people off of Friendster. My Malaysian friends are all active today.

But international users are less profitable. Based on my calculations, Facebook’s annual average revenue per user is $5.09 worldwide. In the United States, that number is $13.99. In the rest of the world, the annual ARPU is $2.81. Although Facebook doesn’t break out revenue for Asia, Africa, and South America, I would expect those numbers to be substantially lower.

There are a number of reasons for this:

Despite the difference in revenue potential, I don’t expect that these customers are substantially cheaper to serve. Although they might consume fewer server resources (fewer pages consumed, less video, etc.) there are costs with providing support in other languages.
On average, I estimate the incremental cost of serving a Facebook user is $1.18.
Facebook is right to push for massive user growth in developing markets and to get users before they adopt regional social networks; but investors should be aware that the growth should cause margin compression in the short term.

The company has been incredibly successful in mobile to date; the S-1 revealed that 425 million people use Facebook from a mobile device each month, a 20% increase from the 350 million people it previously claimed. That’s more than half of its total users.
Facebook has been an oddity in the Web world in that it isn’t dependent on Google. Many sites get half or more of their traffic from Google. A change in Google’s algorithm can make or break it. Facebook doesn’t have to worry about that.

But in the mobile world, Google controls one of the two major platforms. To the extent that Google continues to make it easier and easier to adopt Google+, Facebook faces a risk. With the Ice Cream Sandwich version of Android, users are prompted to sign up for Google+. If Google uses call and text message history to develop its social graph, it will be able to make up at least some of the ground that Facebook has built with its social graph.

Mobile has another challenge in that the ad market isn’t as well developed and the small screen size limits the opportunity to show ads. Facebook is also currently doing no advertising on mobile. If users displace Web-based Facebook usage with mobile usage, that is lost revenue.

Again, Facebook is right to be going after mobile in a big way. Over time, mobile will unlock new opportunities such as true location-based advertising and real-time advertising.

Valuation
At a $100 billion valuation, Facebook would have a price-to-earnings ratio of 100. Google is at 19.6. Apple is at 13. Microsoft is at 10.9. There is at least 2 to 3 years’ worth of growth already priced into it. Among the companies that Facebook would want to be compared with, only Amazon is more expensive, with a P/E of 129.
Its market capitalization would be nearly as much as McDonald’s. Facebook would be worth more than Disney, TimeWarner, and News Corp.

A few blips would be devastating for the stock, as Amazon found out with its revenue miss.

Despite these challenges, Facebook will be one of the most important companies of this decade. In my next post, I’ll explain why.