When we reported that photo widget site Slide said it was the biggest independent widget maker on the web, with 150 million daily slide-show views, someone anonymously commented and said that RockYou’s numbers were better.

Either way, some bad news for both companies came out earlier today. MySpace is reportedly seeking to acquire Flektor, a scrappy, state-of-the-art new service that directly competes with Slide and RockYou, for an estimated $10-20 million, according to Techcrunch.

The implications for the two companies could be unpleasant on a few levels. While both Slide and RockYou have huge user-bases, they also depend heavily on social networking giant MySpace and other sites. MySpace has made it abundantly clear that it is happy to pull the plug on widgets that lose its favor. If Slide or RockYou try to push more advertising, and compete head-on with one of MySpace’s new properties (Photobucket, and potentially Flektor), MySpace may try to snuff them. How valuable are these terrifically popular widgets when a small competitor can innovate quickly, get scooped up at a much lower price and have a giant platform (like MySpace) to gain distribution?

The news highlights the fundamental problem that widget makers face: No matter how popular they become, they continue to rely nearly entirely on the tolerance of the social networks for their traffic. Any monetization scheme they come up with will require permission from these benefactors, or the masses of independent bloggers, and this isn’t guaranteed. Increasingly, the question is whether these widget companies will be able to make money the way their investors hoped. (VentureBlog has a post that discusses this dilemma.)

Back to the Slide-RockYou skirmish: Seeking clarification, we talked to RockYou founder and CEO, Lance Tokuda, and he said their numbers were stronger than Slide’s, but declined to offer specifics. “We have more,” was all we could get. Probing further, we talked to a contact at a company that partners with both RockYou and Slide, and so sees their incoming traffic. RockYou, this contact said, has a 30% lead.

The commercial analytics paint a different picture (see below). Alexa has Slide (in red) clearly in front, as does Comscore. (Editor’s update: Generally, we don’t use Alexa data because it is unreliable; we do so this time because it is backed up by Comscore. Also, see comment below from RockYou’s Tokuda asserting that stats don’t show the full picture)

Their new potential nemesis, Flektor, is the brainchild of two co-founders of Naughty Dog, an immensely successful video game developer, and offers better features — like the ability to blend in video, text effects, and more to your slideshows — packaged into a slick interface. A spokesperson declined to comment on the MySpace acquisition rumors, and said the company has yet to launch officially, but plans to do so in about two weeks. Meanwhile, RockYou is finally confirming their most recent round  of funding, which we had reported back in March. The amount remains undisclosed.

(Update: Slide has appointed former LinkedIn and PayPal executive Keith Rabois as vice president of strategy and business development. In this new role, Rabois will help set the company’s strategic direction across all content and distribution channels, the company said. Rabois, who led corporate and business development for LinkedIn, also worked earlier for Peter Thiel at Clarium, and is on the boards of Yelp, Xoom, Vendio and Fanlq). 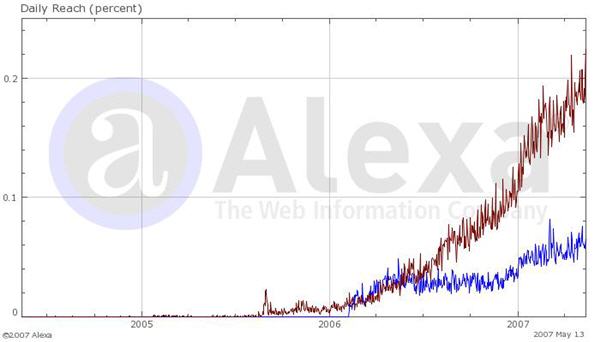 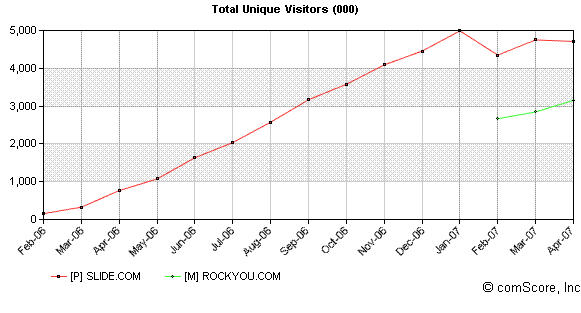