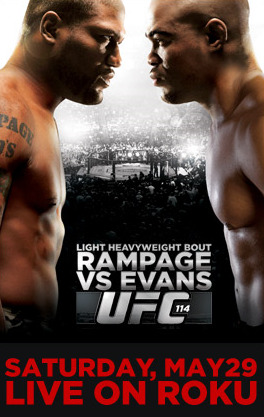 Owners of Roku‘s set-top box — which brings streaming web videos to your television — will soon have access to even more sports-related content, thanks to a partnership announced today with the Ultimate Fighting Championship. The company already has deals with MLB.tv and NBA Game Time, in addition to its  Netflix, Amazon, and Pandora partnerships.

Roku announced that the new UFC Channel will be available today, and will give users access to all live pay-per-view events in high-definition, as well as to archival footage via a special membership.

Saratoga, Calif.,-based Roku has been around since 2002, known initially for its SoundBridge line of devices that let users stream music from their computers to their stereos. The company became more of a well-known name in 2008 when its set-top box was launched as the original “Netflix player,” which Netflix positioned as the ideal solution for getting its streaming video content to televisions. Roku’s box is still one of the better Netflix streaming solutions available, but it also offers much more outside content from the partners mentioned above.

The addition of the UFC channel marks another direct content acquisition for Roku, instead of going through services like Netflix and Amazon. While Netflix is appearing on many other devices now, including Blu-ray players, game consoles, and even televisions, Roku’s direct relationships with content partners will allow its boxes to be seen as more than just a “Netflix player.” I wouldn’t be surprised to see NFL and NHL partnerships down the line, and Hulu is also a possibility, especially with talk of its subscription-based service coming soon.