Rooftop Media is a company that publishes video video of stand-up comedy performances in clubs around the nation, featuring artists who may not make it to the big leagues of Comedy Central.

The San Francisco company said it has raised a $2.5 million first round of funding led by Azure Capital Partners.

The site isn’t open to any Joe comedian — you have to have had some talent in order to quality. Even if a comedian performs in a decent club, human editors are still used to filter to make sure clips are consistently funny.

So this company is a “middle tail” company, somewhere between the Will Ferrells recognized by Hollywood and New York, and the long tail of the masses (see Bernard Moon’s column about why the long tail doesn’t own everything).

Otherwise, Rooftop offers up some of the latest Web 2.0 tricks, including ways to find out more about a comedian (see screenshot below), share clips with friends, search for related comedians, and view specialized channels, such as politics comedy or female comics from Canada. That way, it can target advertising around topics. Comedy draws, but the one shortcoming of this site is the length of the clips. We found none running longer than three minutes. The majority or two minutes or less.

It says its destination site, RooftopComedy.com, features about 1,200 comedians with about 4,200 videos. Will Rogers, chief executive, said the site partners with comedy venues, but uses its own recording equipment, and then streams it live over the Web. It also sends the clips to syndication partners, including mobile carriers. It is featured on the Sprint’s mspot platform in the U.S., and in Nokia’s embedded mobile browser in Europe. 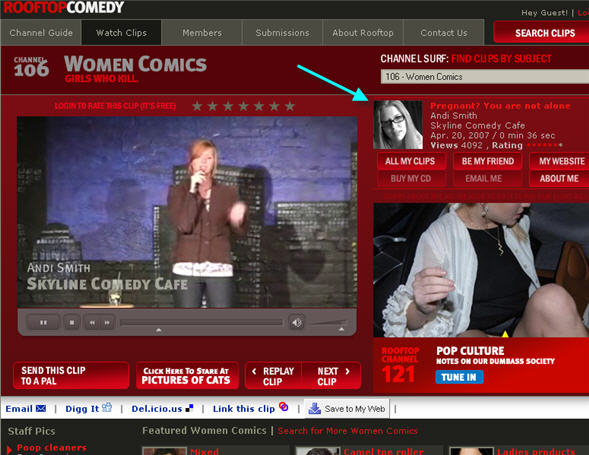