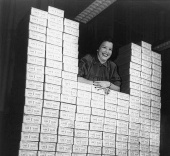 Online advertising up 28 percent at end of year — The total US ad spend in the fourth quarter grew almost 28 percent over the same period last year, according to the latest numbers from IDC. The firm also found that Google’s market share declined toward the end of the year.

Yahoo has confirmed its acquisition of Maven Networks — We reported on the deal several days ago, but Yahoo announced this morning the specific price, which we’d only guessed at earlier: $160 million. That’s a big win for General Catalyst Partners, Accel Partners and Prism VentureWorks, which together had invested around $24 million, and apparently had invested most recently in 2006 at at a pre-money valuation of just $30 million (which means they’ve made very nice money). As Dan Primack notes, this is great for GC, which originally invested in 2003 at a $7.5 million pre-money, though interestingly, GC has also pumped a ton of money into Maven competitor Brightcove – including a recent round at around a $210 million post-value.

AOL to launch mobile social networking platform — AOL plans on releasing a mobile software platform for social networking, which will initially work across most of the major device operating systems. The platform will have its own XML-based markup language and server, and be open to developers.

Starbucks begins offering (somewhat) free WiFi — Starbucks will drop T-Mobile and take on AT&T as the partner for its 7,000 United States locations. The upshot: If you’re an AT&T broadband subscriber, WiFi at Starbucks is now free; if not, access is still cheaper. Prices for WiFi in all locations have been steadily dropping, which probably sounds like another nail tapping into the coffin to startups like Fon, which plan on creating large networks of WiFi hotspots.

Topanga high-intensity lighting funded by Khosla — Topanga Technologies is based in Topanga, California. If only everything in life were so simple. We don’t know much more than that it makes high-intensity, discharge lighting, as it’s currently in stealth mode. Khosla Ventures disclosed the investment this morning, alongside its announcement that it hired Ford Tamer.

Stealth division at Electronic Arts making social games — A division called EA Blueprint will make games for distribution on online platforms including social networks, according to a story on Gametap. Blueprint will work together with small developers to create games, some of which will be “brand extensions” of existing EA games. The company, however, declined further comment.

Bored.com sells for exciting $4.5 million — The domain name game is as flush as ever, with the sale of Bored.com having just brought in $4.5 million through auctioneer Moniker. No broken records here, though — Sex.com brought in $12.5 million two years ago. Fittingly enough, the sale price for Business.com fell somewhere in between sex and boredom. (Update: See comments below for more color on the various sale prices.)

DanceJam gets another $3.5 million for dance, jam — DanceJam, which hasn’t even launched yet, has gotten tons of publicity because its founder is MC Hammer, not to mention that Michael Arrington is an investor. That means the site, a community for dancers to upload clips of themselves dancing and rate others, had better be good when it finally does launch. The $3.5 million was provided by Softbank Capital, Rustic Canyon Partners and some new angel investors, according to TechCrunch.

Headhunting ad for Yahoo employees shows up on Yahoo profile — First Round Capital’s Josh Kopelman placed an ad in Facebook, asking Yahoo employees if they might like to leave their increasingly troubled parent to found startups, and he showed evidence that suggested more employees are clicking through than several months ago — a sign of a potential mass exodus at hand. However, turns out the more recent ads — the ones drawing more clicks — were made more enticing because they showed photos of Yahoo employees. This distorted the entire experiment. The ads managed to find its way onto one satisfied Yahoo employee’s profile, occasioning an interesting exchange. “I don’t want my colleagues to think I’m leaving Yahoo, so … I’ve pulled my “Facebook fandom” for First Round Capital,” writes the disconcerted Yahooligan. The ad raises yet more questions about how Facebook can gracefully pipe ads through social network connections. More at Valleywag.

Hands-on review of Google Android in use in Barcelona — Gizmodo has a quick review of a mobile unit with Google Android installed from the Mobile World Congress in Barcelona. From the post: “While the Android platform is solid enough for development and testing, it seems we are far away from seeing actual products getting into the market.”

Motorola and Nortel consider merging wireless units — A combined wireless-infrastructure division between Motorola and Nortel would generate $10 billion in annual sales, part of a proposed restructuring of Motorola under consideration by new CEO Greg Brown. The two company’s units make networking equipment for wireless carriers. The broader plan involves breaking Motorola up into parts, and spinning off the struggling handset-making unit.

Setting up wind turbines? Be prepared for a wait — These lines make the Soviet Union look like child’s play: Developers applying for wind projects in Minnesota face a 612 year waiting list, according to EcoGeek. That’s an extreme example of the bureaucracy that come with issuing permits for new cleantech projects.