iPhone “jailbreak” excites nerds, confuses normals — Business Insider explains that in theory, a jailbroken iPhone — that means it can do stuff neither Apple nor AT&T want it to, like run on Verizon’s network and install App Store applications without paying for them — could usher in a new era of technological innovation. In practice, it mostly means Verizon will soon pick up a few of its most demanding customers ever.

Virtual Family demands your realtime — The iPhone version of Virtual Families, the popular Sims-like game, lets you stay in touch with a computer-generated character you’ve created, plus a small cast of others such as spouse, children, neighbors and coworkers. The $3.99 iPhone app connects to the $20 version for Mac or PC. Here’s the addictive catch: Your virtual family, like a real one, keeps on going when you’re not around. Spend too much time at the real office and Virtual Wife will have a surprise for you when you show up at home again.

Hands up if you’ve seen an ad on Twitter — Read/Write Web editor Marshall Kirkpatrick reports that he’s only seen two real ads in Twitter’s ad space in the upper right corner of Twitter.com user pages. The rest are vague “sponsored definitions” links that Kirkpatrick suspects are too cheap to keep Twitter in business.

Google adds RSS to Blog Search redesign — The Google Blog Search homepage, shown below, now looks like a news site. But it flips back into a familiar — and hence easy to use — search results layout when you run a search. Also, you can now subscribe to topical blog searches, something the Official Google Blog says was a big customer demand. You can also set a Google Alert for a specific set of blog search terms, but I haven’t figured out how to get an RSS feed for that. 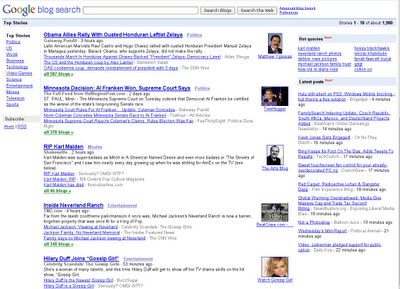