Divorce360.com, a Web site for people dealing with divorce — This had to come. But why was Divorce.com so late, arriving after hundreds of other social networks have already launched? Here’s one theory: Most entrepreneurs launching social networks are so young they haven’t even married yet, let alone gone through divorce. It was started by executives formerly with Bankrate, Procter & Gamble and Gannett, is based in North Palm Beach, FL, and has backing from Austin Ventures and individual investors.

Bid4Spots auctions unused radio airtime time online — Encino, Calif.-based Bid4Spots, which holds weekly reverse auctions of unsold radio advertising time online, has added a new feature, SpotFill, according to SoCalTech. This feature lets advertisers pick up any unsold airtime in their target market after the auction closes. In a reverse auction, the radio stations bid for advertising dollars; the one with the lowest price wins. The company partnered up with eBay in June of this year, and poses a threat to Google Audio.

House energy bill may face filibuster and veto — We’ve been encouraged by the progress of the Congressional energy bill, which, as we mentioned Monday, includes stronger than expected standards for renewable energy. The difficult negotiations for the bill in Congress will be for naught if President Bush flexes his veto power, as one of his advisors threatened in a letter. There’s also the threat of a filibuster from Senate. More from Reuters.

Cleantech investment may need a breather — As we’ve mentioned several times, cleantech investment is on a roll, with deals just in the first three quarters of this year reaching $2.6 billion. Cleantech Investing, though, thinks we may see flat growth for a couple quarters, going forward. Read their thoughts on the subject here.

Nokia buys Avvenu, may compete against mobile efforts by Google and Microsoft — Mobile phone manufacturer Nokia has said it plansto focus on providing web services to its customers, and that was when it bought mapping company Navteq for $8.1 billion this past summer (our coverage). Now it has gobbled Avvenu, which incidentally lets people share documents, video, and audio files and other information seamlessly across computers, phones, and other devices. Through this purchase, Avvenu could serve as Nokia’s core web infrastructure as it expands its services, as one source tells us. Ultimately, Nokia could make your phone your remote control for all of your data, on any of your devices. 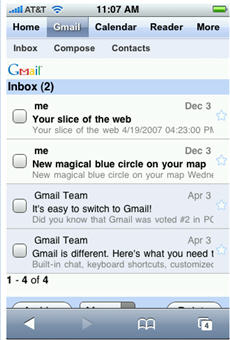 Google applications, designed for iPhone — See screenshot at left for example of how Google’s new interface looks on the iPhone. Now, applications like Gmail, Calendar and Search appear in the slick interface, and run even faster. More here. Nokia has its work cut out for it.

Clicktale, web analytics firm, raises $3 million — The Tel Aviv, Israel company lets web site owners record and watch movies of their users’ browsing behavoir, such as what they click on. Clicktale provides analysis of a site’s user behavior against the thousands of other sites it serves. The money comes from European venture firm YL Ventures. More from Clicktale here. The company provides the following insight: