Google Docs gets more social — In the wake of the new Microsoft Office launch, Google has revamped its documents application, making it easier for users to share their documents and spreadsheets with others, while simultaneously beefing up privacy to make information sharing safer. 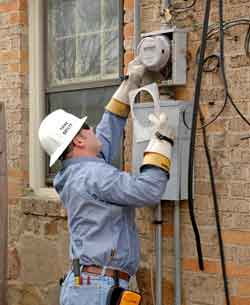 S.F. says no to smart meters — The City by the Bay’s attorney has thrown up road blocks to the Pacific Gas & Electric Company’s smart-meter rollouts before a third-party certifies the devices’ accuracy. PG&E’s smart-meter deployment has been under attack since residents of Bakersfield, Calif. filed a class action suit alleging that their energy rates went up after the meters were installed.

GayCities launches new local city guides — The travel-guide company targeted at the gay and lesbian community announced today that it has redesigned its sites to make them more local. More reviews and comments appear from local residents, and there is more emphasis placed on local events. Gaycities has also built in new ranking tools, making it easier for crowd favorites to float to the top.

Qualcomm gets busted for antitrust — U.K.-based fabless semiconductor company Icera has filed an antitrust complaint against Qualcomm. Icera focuses on chip sets for mobile broadband devices and claims that Qualcomm has engaged in anti-competitive activity. Qualcomm says that similar charges have always been dropped in the past.

Facebook jumps on the ‘Places’ wagon — It looks like the social network has struck a deal with Localeze, a listing of local businesses, in preparation for launching a new line of fan pages and maybe a check-in service. Twitter just announced a similar service, Twitter Places, which lets its users identify the commercial locations they are at when they tweet.

Apptera bags $10M for mobile advertising — The company, backed by Alloy Ventures, Lightspeed Venture Partners, and Walden International, will use the money to expand its voice and visual advertising features. For customers who opt in, the company serves voice ads with discounts, promotional codes, and other visual elements attached.

WordPress 3.0 unveiled — The third version of the blogging platform went public today, allowing one blog administrator to have control over multiple blogs from one install of the software. The default blog template is also different and comes with more options for customization.

Life simulator gives birth to self-replicating creature — Game of Life, a digital universe where users can mathematically simulate the development and evolution of life on earth, has taken a step forward, with player Andrew Wade generating its first self-replicating organism, a revelation.