Data centers floating in the SF Bay? — Some of the stranger news we’ve heard, but apparently true. A Silicon Valley start-up called IDS (International Data Security) is planning to build up to 50 data centers on de-commissioned cargo ships, the first of them docked at Pier 50 in San Francisco. Image at left is an oil tanker in the Bay carrying some of these data centers, according to Silverback Migration Solutions. Apparently, this keeps the data center secure from “natural disasters” according to a company brochure, and the sea water helps cool the servers. Speaking of disasters, we recall a bad one two months ago when a tanker hit the bridge and spilled all kinds of oil. Are servers really going to be safer floating on the water? We couldn’t find too much information about this company, so still trying to confirm this one.

Xobni‘s Outlook plugin for better email processing gets upgrades, expands test group — The San Francisco company impressed us at launch. However, it had to shut off access, due in part to high demand. It has spent the last few months making a range of improvements, including faster data processing and design changes. Today, Xobni invited the more than 14,000 people on the company’s waiting list. Each person will be able to invite up to five more friends. Xobni is most popular among those needing to track of a lot of work email, as you’d expect: Sales and marketing people, and project managers. Users are clicking on the application an average of more than eleven times per day, and internal surveys show more than 90 percent of its users are happy, the company said. Enhancements include right click actions, adding pictures, drag and drop of files, copy and paste of text etc. See here for more.

Microsoft dealmaker Bruce Jaffe leaves for Valley startup life — Jaffe was part of the team that acquired advertising firm aQuantive and invested $240 million in Facebook. He’s been interviewing at jobs in Silicon Valley, but has instead decided to start his own company, according to Valleywag’s scoop. Marketwatch confirmes the news.

Yahoo Tech Ticker: A tech TV we may just watch — It’s a select group of pundits, as TechCrunch reports: Sarah Lacy is a BusinessWeek reporter with a book on Silicon Valley slated to hit shelves later this year (you can get it on Amazon, here). Henry Blodgett is a fallen analyst turned successful blogger at Silicon Alley Insider. Paul Kedrosky is an investor, entrepreneur, blogger, and talking head. These people know a lot, and their attitudes are just as sharp.

Yahoo’s second iteration of its browser-based player is now public — It lets you link to MP3s on any web page. Details here. 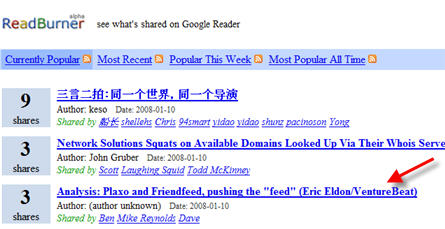 Readburner lets you see what is shared on Google Reader — Readburner is the latest meme-tracker, this time on what are the most popular items shared via Google’s RSS reader. See image at left, which showed that our own Eric Eldon’s piece today was the third most popular item shared as of 10:30pm Wed eve. Mashable has more.

Start-up Nextreme keeps chips cool — The Durham N.C company, a spinoff of research institute RTI International, says it lowers temperatures in the specific areas of chips that get too hot. Excess heat has caused chip giants like Intel and AMD to find alternative methods to speed up their processors, for example creating multi-cores chips. WSJ has more.

Wiki-style website to help speed up U.S. broadband access? — Analyst Drew Clark of Washington DC will launch BroadbandCensus.com later this month, letting people enter where they live, the price of their service and how happy they are with it. A speed test will measure connection quality — and put pressure on the federal government to improve service where it is poor.

Terry Semel restarting his old investment company, Windsor Digital? — Semel, who exited from Yahoo after that company’s anemic progress over the past couple of years, is reportedly joining up with former Yahoos Drew Buckley and Jeff Karish. PaidContent has the news.