News Corp. to buy Adconion, the German ad network? — We’re hearing that News Corp.’s Fox Interactive is negotiating to buy the company, and that its a big number. Fox has been building its own ad network (see our coverage, initially here, and then most recently here ) to help it monetize its disparate properties, including the huge network MySpace. Its efforts have been slow though, and we hear that its desperate to own a network. FIM said it wouldn’t comment. Hedge funds and PE firms are also apparently mulling an offer, we’re told. Adconion ranks among the top 22 or so ad networks, with about 75.7 million monthly unique U.S. visitors in October, according to Comscore, or about 42 percent of total U.S. internet audience (see table below).

Motorola sacks chief executive Zander, brings in new CEO — Chief executive Ed Zander will step down, to be replaced by President and Chief Operating Officer Greg Brown. Mobile industry managers are under pressure these days, in part because of new efforts like Apple’s iPhone and it won’t get better if Google’s Android mobile software developer platform gets traction. Motorola, the handset manufacturer, had a hit with Razr, its slim, inexpensive mobile phone, but hasn’t been able to repeat the performance in the past year. The Wall Street Journal has more.

Sprint rejects buyout offer from South Korea’s SK Telecom and Providence Equity Partners — Sprint has roundly rejected an offer of $5 billion from the two bidders, refusing to even meet to discuss it further. The two had wanted to replace Sprints management team, the New York Times reports including to install Timothy M. Donahue, the company’s former executive chairman, as the new chief executive. Sprint lost its chief executive, Gary Forsee, just weeks ago.
MP3s come of age, through Amazon — Billboard has an in-depth look at the significant new deal between Amazon, Pepsi, and some record labels, where Pepsi drinkers can trade in five bottle caps for a free MP3 download. To get the MP3s it gives away, Amazon is proposing paying music labels 40 cents per song, according to the article’s sources, while it normally pays 65 to 70 cents. Pepsi has asked all labels to participate but the labels are balking at Amazon’s terms, and many don’t offer even partial libraries of their recordings in MP3 format. A Pepsi song giveaway through iTunes in 2004 delivered poor results, with only around five percent of free songs actually being downloaded.
In case you were wondering, YouTube still dominates online video — The latest stats from Comscore: YouTube has 28 percent of the market while the nearest contender, Fox (including Myspace) has 4.2 percent.
Sign in and comment on Google’s Blogger blogs using your OPenID account — more here. 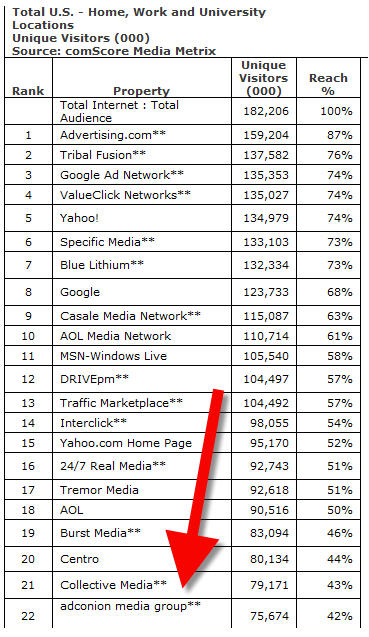