Google’s Q4 earnings below expectations — Google announced today that its revenues were $4.38 billion for the fourth quarter of 2007, up 51 percent from the fourth quarter of 2006 and 14 percent from the third quarter of 2007. A number of writers said the numbers fell below expectations,and Google CFO George Reyes attributes the disappointment to the fact that “social networking inventory is not monetizing as well as expected.” Google shares fell by 8 percent. It wasn’t all bad news for Google today, however, as a bidder offered $4.71 billion for a big piece of U.S. airwaves. Since the bid was over $4.64 billion, the spectrum will be accessible to any device or software application, a condition sought by Google.

Motorola to break up? — Motorola may be considering a breakup of the company. The company says splitting up might allow different parts of the company to “grow and better serve its customers,” not to mention avoiding another $49 million loss, as Australian IT reports that it had in 2007. A breakup would also probably have the positive effect of spurring innovation and giving more startups a chance to work with the phone manufacturer.

Skype sued over 8-year-old patent — Internet phone company Net2Phone is suing Skype for infringe of an 8-year-old patent. The suit seems to involve a patent for a “point-to-point Internet protocol.” Russell Shaw doesn’t seem to think much of Net2Phone’s argument. 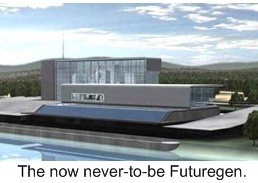 DOE pulls the plug on clean coal project — The U.S. Departmant of Energy has announced a “restructuring” of the FutureGen clean coal initiative, which essentially means it’s pulled out of project in favor of a less ambitious one. The goal was to build a demonstration coal plant that would take coal and convert it to energy wtihout emitting massive amounts of carbon monoxide, but the DOE claimed costs were too high. The FutureGen Alliance, which consists of coal and electric companies involved in the project, has not taken the news well.

Meebo Rooms becomes automated service for Web sites — Meebo Rooms is releasing APIs that will allow Web sites to embed Meebo’s chat rooms through an automated process, without having to paste in the relevant codes. The company is also launching the Meebo Network, which will play ads in Meebo Rooms across the Web.