Google hits $700, readies for mobile deals — Watching Google’s stock price creep upward has become a sort of tech version of the Dow Jones index. Each milestone $100 addition the stock crosses seems to reflect favorably on the chance of Silicon Valley as a whole riding the latest wave to completion (and not crashing, as in the dotcom era).

The latest spurt, which pushed the stock up to $707 at today’s close, may have been aided by a WSJ article suggesting that Google is getting ready to announce deals with Verizon and Sprint Nextel to sell phones with its new mobile operating system. If the deals happen, Google could be a step closer to advertising on mobiles — a coveted market for any company. The platform would also be open to independent developers, and help move popular Google applications like Maps onto cell phones.

Microsoft releases challenge to Google Analytics — Early this week, Microsoft quietly announced the release of Gatineau, its answer to Google Analytics. Google’s Analytics has long held most of the analytics market. Both free and intuitive to use, it’s the obvious choice for small companies. However, Analytics also tends to push Google’s own AdSense advertising.

Microsoft’s work on a competing analytics platform seems like an obvious move to advance its own advertising agenda. With any luck, the new competition will raise the bar for analytics software as a whole. As more sites are able to effectively do in-depth measurement on stats beyond visits and pageviews, the argument for raising advertising rates on the internet will be furthered.

Google’s SearchMash now has a Flash version — Google built the site to test new interfaces for search. Unlike the previous interface, which places results from different search engines (image, blog, video, etc) in an inelegant navigation bar in the right corner, the Flash interface offers tabs and has a cleaner feel. Strangely, clicking on a result doesn’t take you to the page, but brings up a preview of it in a sidebar. From this sidebar, you can navigate to the site or search within it, an interesting but slow mechanism.

Plentyoffish, the one-man dating company that may be worth $1 billion — This story about entrepreneur Markus Frind, who is making $10 million in revenue a year as a one-man shop (just recently, he hired a second person) is extraordinary, even if a bit hyped. 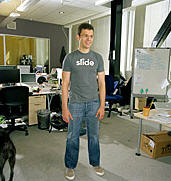 Will Max Levchin become one of the first to create two $1.5 billion-plus companies? — First, he helped launch payment services, PayPal. Now he won’t rest until he can get Slide, the widget company to a size that is just as big. He’s working 18 hour days to get there. He’s widely known as one of the hardest working guys around. Even when he’s off at the gym, he’s trying to do more pushups than everyone else. Great profile in the NYT.