Pay By Touch needs $150M, got any spare change? — Despite sucking in $300 million over the years and not yet coming up with a viable business, Pay By Touch’s chief financial officer told shareholders on a conference call that the company needs another $150 million to survive, according to Valleywag, which also first reported the company’s filing for bankruptcy earlier this week. Beset by inefficiency and executive-level scandal, the company already took in a $9 million emergency infusion, as reported three weeks ago.

Wave power drops anchor off California coast — A deal between Pacific Gas & Electric and Finavera Renewables, a publicly-traded Canadian company, will result in a new two-megawatt wave power installation off the Northern California coast. While Finavera plans to eventually install over 100MW of wave energy, the deal provides for PG&E to only begin buying the first 2MW by 2012. Dozens of other building applications have yet to even reach government approval, suggesting wave power will be one of the last clean technologies to reach wide-scale commercialization. 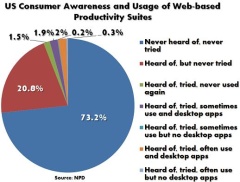 Study: Google doesn’t own entire Earth, yet — A study by research firm NPD Group suggested that a large majority of people have neither heard of nor used online office suites like Google Docs, causing some critics to begin writing obituaries: R.I.P.: The Web 2.0 Office Suite. It’s a bit premature to predict the death of an industry that was just born. As this lengthy New York Times article notes, the fight of Google (and others) against Microsoft is just beginning.

EBay isn’t dead yet, either — A trio of hit-pieces from the New York Times’ Saul Hansell suggest that because some sellers and some buyers hate eBay, the company is failing and should be bought by Amazon.com. We’re not the company’s biggest fans, but as this Mashable piece notes, listings and sales on eBay are pretty steady, and the company actually doesn’t seem to be in bad shape at all. And changes in the auction market haven’t escaped eBay’s attention. The Financial Times details some of eBay’s internal efforts to update its services.

Video streaming site Ustream.tv raises $2 million, connects with soldiers — Although the company faces competition from Kyte, Justin.tv, and others, it has done a great job of carving out a niche for itself. A number of presidential candidates have used it to hold live question-and-answer sessions with the public. The company is also advertising itself as a way for soldiers serving oversees to connect with their families — the company’s co-founders were cadets at West Point together, and served in the army for a number of years. The company has also convinced former four-star general and former presidential hopeful Wesley Clark to join its advisory board, and has previously gotten funding from Frank Caulfield, co-founder of Kleiner Perkins (more here). It says more than 115,000 people have joined Ustream since it launched in March, with around one million hours of spent on the site per month. The new funding comes from Western Technology Investors, Band of Angels, and unnamed angels.

Hollywood strikes a new blow against file sharing — A federal judge terminated a case between the Motion Picture Association of America and TorrentSpy, one of the most popular Bittorrent indexing services. The judge ruled that TorrentSpy intentionally destroyed evidence and obstructed discovery in the case. As a result, the only thing TorrentSpy can argue in court is how much in damages it must pay to the MPAA. Just the latest blow against file sharing. If enough fringe services are shut down or curbed, legitimate startups could pick up some of the business. More from CNET News.

Dan Hesse named Sprint/Nextel CEO — The replacement for ousted CEO Gary Forsee will be Dan Hesse, a former CEO at AT&T Wireless and Terabeam, a dotcom-era company that raised over $550 million before selling for a pittance. Hesse has strong ties in the Seattle entrepreneurial community, which could be good news for wireless startups in the area. Whether he’ll resurrect Forsee’s WiMax initiative remains to be seen.