Jobster CEO Jason Goldberg out — Jason Goldberg, co-founder and CEO of the job site Jobster, is headed to the Big Apple to work on a new company. Jeff Seely, who just helped sell Sharebuilder, an online share trading site, for $220 million, is stepping into his role. A sign of more trouble for Jobster, or the beginning of a turnaround? As we’ve noted before, despite its $50 million in funding Jobster hasn’t yet done much to put itself ahead of the pack.

US delegation to Bali pisses off Al Gore — Al Gore, the newest star of Silicon Valley venture capital firm, Kleiner Perkins, doesn’t like what the official US delegation to Bali is up to. Neither do John Kerry or Michael Bloomberg, who have teamed with Gore to become an unofficial delegation at the world climate summit, according to the WSJ. “People are turning away from the official delegation…” a WWF director said, referring to how senior diplomats are snubbing President Bush’s team in order to dine with Gore, et al. Ah, sweet liberal revenge.

Opera sues Microsoft over Internet Explorer — The underdog web browser Opera accuses Microsoft of being a monopolist because it packages Internet Explorer with Windows — the standard fare for eliciting lawsuits against the Redmond, Wash., software giant. However, the suit also complains Microsoft refuses to abide by the design principles of the internet, even with the newer IE7. If the complaint finds footing, Microsoft may be forced to mend its ways, which could make web designers happy. 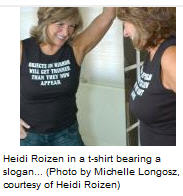 Venture capitalists Heidi Roizen slims down — Roizen has closed down her venture capital firm, as already reported, and instead has slimmed down, and crafted a collection of songs to help other women lose weight while grooving to her tunes. Details here.

The guidelines for online video success — Blip.tv co-founder Dina Kaplan and others share their insights about the economics of online video with TVWeek. First guideline: You need 50,000 to 100,000 pageviews per month before advertisers will take you seriously, and 500,000 before it can be a full-time job. Read the rest here.

Five hundred ways to customize stuff — Startups or VCs toying with the idea of mass customization in a business may want to take a look at the cyLEDGE International Configurator Database. The people behind it have managed to collect what looks like every product customization tool on the internet, providing a handy reference to those building their own.
Julian Lennon, son of Beatles icon John Lennon, invests in MyStore — MyStore emerged as a response to MySpace’s restrictions against selling within its network, letting artists become their own distributors with a button on their MySpace page. It is now an online service that serves all sorts of sellers, not just artists. Details here.

The iPhone dominates, here and abroad — This year’s-end Zeitgeist reflects both the most popular and the fastest-rising global search terms that people have typed into Google.com over the past year. To see the results, visit http://www.google.com/zeitgeist.

PermissionTV and Decentral.TV both raise more cash, while Podtech struggles — Details here, for the fundings of video sites DecentralTV and PermissionTV. Podtech, another video site, however, has lost well-known blogger Robert Scoble. We’ve asked Podtech’s investors for comment, given increasing rumors the company is on the rocks. We haven’t heard back yet. Scoble is reportedly considering joining Fast Company, but he isn’t confirming yet.