The mobile TV revolution continues, and MobiTV is hot — MobiTV, of Emeryville is one of the start-ups on the forefront. It offers TV programming from networks and cable providers. It started out serving mobile phones. Now it has expanded, first to WiFi, and now with AT&T to anyplace with broadband.

Venture investors like Oak are paying a good price to play. MobiTV raised $70 million in a July third round, at a valuation in excess of a pretty $400 million, according to PE Week Wire. That’s compared to a value of just $50 million following a $15 million round in 2004. Oak invested $65 million of the total new investment.

Loopt, the mobile presence company, is finally launching — Loopt uses GPS and other data to give you the location of your friends, along with their presence status, such as available or away. Techcrunch has a review. The company has changed its name several times.

You’ll be able to get alerts when your friends are within a certain distance, and send messages to them (see image below). The service is initially available only to customers of pay-as-you-go service, Boost Mobile. 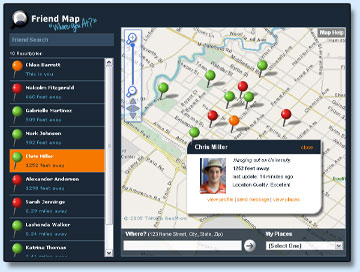 The Costco of travel sites — cFares, a travel start-up based in Redwood Shores, is charging you $50 to get access to wholesaler discounts, and the resulting prices are about $30 to $50 below those of other major sites, finds GigaOm. The company has raised $1.5 million from Garage Technology Ventures and is working on a second round. Also interesting: cFares.com has built a way for an airline to under-bid another airline at the point of sale, thereby providing a below-market price to the consumer. Finally, it has a “Name-Your-Price” feature, where it does an ongoing search online for fares priced at your wish, or lower.

Social networking siteXuQa raises more than previously thought — The youth oriented site, previously slammed by critics, has relaunched; it is focused on model contests, and revolves around a system of “gathering peanuts.” Goal is to become the most popular, and you get up to $1,000 in cash for rewards. We’ve mentioned the company before here. Some doubted it would raise VC money. But who isn’t able to raise money these days? Turns out, it has gotten $1.3 million from BV Capital and Morten Lund, an early Skype investor. It is based in San Francisco, with most of its developers in Karachi, Pakistan.

Yahoo Local revamps — It now lets you write reviews and submit ratings for local businesses, save your favorite locations, view local businesses on one map to see what’s around you and so on. (See more here, which includes a look at Microsoft Live Local Search’s improvements too.)

Yahoo seeks to retain talent — It is setting up an in-house incubator, called Brickhouse, and will be led by Flickr founder Caterina Fake.

Networking company Netgear ships a Skype phone that works with WiFi — The phone started shipping this week for $249.99.

Google’s market share in China is plummeting (see Red Herring article) — We got in touch with Kaiser Kuo, who wrote the piece, and he says the guy who led the study, Mr. Lu, is credible. As a start-up, Google neglected China. Chief executive Eric Schmidt first traveled there last year. More recenlty, Google was criticized for allowing censorship there, but China’s government has played hardball anyway, and now Baidu is eating Google’s lunch.

Google Earth shows you around the Bay Area with TurnHere videos — Google has released a host of new ways to find information while you’re zooming around its virtual globe. You click on the checkbox for “Featured Content” in the Google Earth sidebar, and a whole bunch of multimedia overlays pop up. In the Bay Area, we see the usual National Geographic feature boxes already announced. But now you see a whole bunch of new videos from start-up TurnHere; it’s a good way to check out restaurants or other places before you visit. In fact, TurnHere plans to shoot 25,000 short videos this year, most of them neighborhoods and local attractions. This could get interesting. Here’s a good Merc story on TurnHere. Here’s a story about Google’s Featured Content. 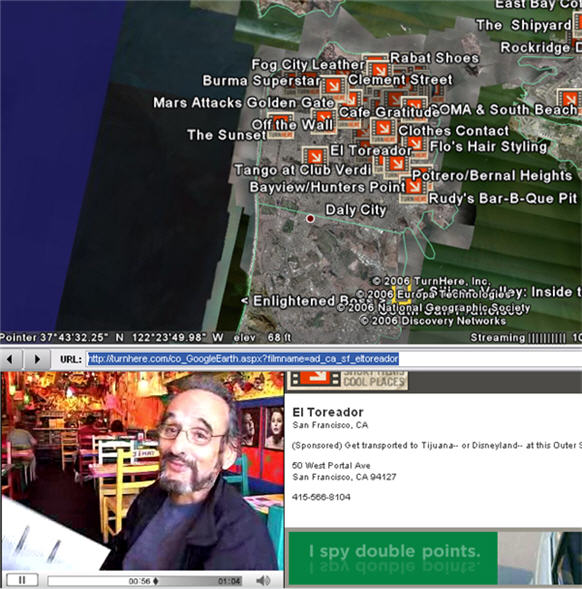