Murdoch appears to have enough Bancroft family support for purchase –The jury is still officially out, but the NYT is saying it looks like Dow Jones and its jewel, the Wall Street Journal, will indeed to go to Murdoch’s News Corp.

Hakia’s Scoop Bar — Hakia, one of the new search engines trying to take on Google by using “semantic” technology, has released a so-called Scoop Bar, which takes you more directly to the text you’re looking for in results. When you select a result at Google, you get taken the page and that’s all. Hakia’s feature automatically scrolls down to where the good stuff is and highlights it. (Via Pandia).

Hitachi’s new search — The company has developed a search technology that can find images similar to a specified image from millions of images and video data in one second.

Wikia buys Grub — Wikia, the company that wants to draw on user participation to create a search engine that rivals Google, has taken another step. It is buying Grub, an screensaver users can download and which exploits their idle computer CPU time to crawl the Web. Search Engine Watch has a good story on this, explaining how the Grub open source technology works. GigaOm has an informative post too.

Yahoo Search Assist — These are the days of new search engine features. Yahoo now has a feature called Search Assist, which seeks to detect when you are hesitating about what search term to use, and then offers up alternative queries. It goes beyond guessing what word you’re typing. It offers up terms that are also conceptually related to the search query you’re using. There’s a good review at SearchEngineLand.

Live Search’s new commands for search — Microsoft has unveiled new short commands for image search. If you’re looking for images of Jimmy Hendrix for example, you can add “filter:face” to select only images of Hendrix’ face. There’s also “filter:bw” for black and white images, and “filter:portrait.” 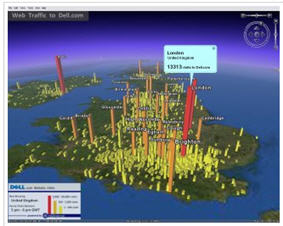 Google enterprise — This software lets companies and other groups view their global data and imagery. Companies are using it, Google says, for things like designing new buildings, exploring for energy and responding to emergencies.

Google is promoting its Checkout more aggressively on its site — Details here.

PG&E to buy electricity from one of the world’s largest solar plants — Enough to power 400,000 homes, the power comes from a deal with Solel Solar Systems of Israel, which is building a 553-megawatt plant in California’s Mojave desert.