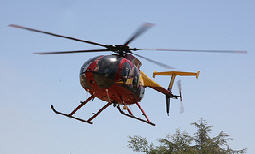 Page draws attention with helicopter landing — The Google co-founder’s colorful arrival at the Foo Camp this past weekend was captured on film. Scott Beale, always good with imagery, has the clips on his site Laughing Squid.

Thomas Layton takes top job at Metaweb Technologies — Metaweb is one of several companies trying to create a public database to store the world’s digital information. It has garnered considerable hype. It is backed with $15 million from Benchmark Capital and others. It isn’t much of a surprise, then, that Layton comes from another Benchmark company, OpenTable (Benchmark is known to take an active role in recruitment at its companies).

Change at the helm of Topix.com — Co-founder Chris Tolles has become chief executive of the five-year-old local news site. He takes the place of Rich Skrenta. No real reason is given. However, investors have high expectations, having pumped in $15 million recently. Topix was an early news aggregator online, an area which is now filled with competitors.

LinkedIn opens its service to third-party developers — The social network for business professionals says it will open its API over the next several months. This is late, given that most other networks have already taken similar moves, but better late than never (ZDNet’s Dan Farber talks with LinkedIn’s chairman Reid Hoffman).

Local.com wins local search patent — The publicly traded search engine Local.com, which no one has heard of says its patent covers the process of indexing and retrieving web-related information by geographical location. We don’t know where this will go.

The class difference between Facebook and MySpace — A study suggests users of Facebook are wealthier and more educated than those of MySpace — not completely a surprise, given Facebook was started as a social network for colleges. And it was founded by Mark Zuckerberg, a Harvard student, with some classmates, and it spread among the elite schools before moving on to other groups. The culture of that group has been reflected in the site’s design and overall tone.

Fairtilizer not a great name for Web site — Anyway, its the name of the latest online music community site reviewed by ReadWriteWeb.

Sequoia Capital’s $100 rule — If partners at the big-name venture capital firm arrive late to a meeting with an entrepreneur, even by a minute, they have to donate $100 to charity. Entrepreneur Noah Kagan confirms this with partner Michael Moritz.

SlapVid a P2P video player from your browser — You’ve seen peer-to-peer technology used by Joost, Babelgum and Veoh to lower the costs of delivering Internet TV to your desktop. Now SlapVid, a Pittsburgh, Pa. company is using peer-to-peer technology to deliver video straight to your browser. There’s no download, just an applet that manages delivery as SlapVid draws the video content from other peers. You can sign up for it at the site. Users can also make their own widgets, called “Slapstrips,” that can share the video on other Web sites.

Mitch Kapor’s Foxmarks to launch search technology — We first covered veteran entrepreneur Kapor’s company, Foxmarks, six months ago. Back then, Kapor said Foxmarks would be a cross between Google and Wikipedia — that was before Wikipedia’s founder decided to try out the idea himself. Foxmarks has since taken a circuitous route. It offers a way to automatically synchronize your bookmarks between two or more computers running Firefox. Doing this, it has collected data about bookmarks, knowing for example what words people have used to tag specific URLs. In a couple of months, it will offer a new search engine, according to Techcrunch, so that when you search for a word in its database, it can return URLs that match those words. The results should be relevant, considering Firefox bookmarks are usually highly organized by users. More at Kapor’s blog.

Ebay makes up with Google, sort of — The large auction site resumed advertising on Google, albeit in a more limited volume, saying proudly: “We found that we were not as dependent on Google AdWords as some may have thought.”

IPhone protected under lock and key — AppleInsider reports iphones are being delivered to various airports with armed guards, treatment normally reserved for diamonds and other precious cargo.

Business.com valued at $300 million? — You’ve probably seen the rumors about bids for Business.com, the company with a very popular domain name. It is considered valuable because stray Web users will blindly type in “business.com” and land on the site. The site can then serve them with advertising without doing much more. Om Malik unearths reports that the company does have a business and is reportedly making $50 million in revenue. So the value is not as absurd as it sounds. Benchmark Capital’s Bill Gurley is an investor in this company.